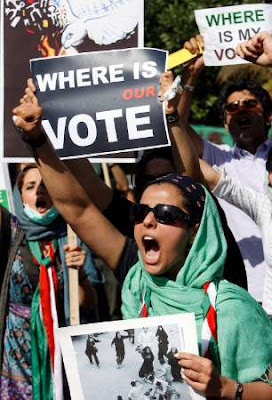 Charles Krauthammer's column in the Washington Post should be read in full. It is an urgent article that one hopes and prays will persuade the White House to take a decisive stand for freedom.

Millions of Iranians take to the streets to defy a theocratic dictatorship that, among its other finer qualities, is a self-declared enemy of America and the tolerance and liberties it represents. The demonstrators are fighting on their own, but they await just a word that America is on their side.

And what do they hear from the president of the United States? Silence. Then, worse. Three days in, the president makes clear his policy: continued "dialogue" with their clerical masters.

Dialogue with a regime that is breaking heads, shooting demonstrators, expelling journalists, arresting activists. Engagement with -- which inevitably confers legitimacy upon -- leaders elected in a process that begins as a sham (only four handpicked candidates permitted out of 476) and ends in overt rigging.

Then, after treating this popular revolution as an inconvenience to the real business of Obama-Khamenei negotiations, the president speaks favorably of "some initial reaction from the Supreme Leader that indicates he understands the Iranian people have deep concerns about the election."

Where to begin? "Supreme Leader"? Note the abject solicitousness with which the American president confers this honorific on a clerical dictator who, even as his minions attack demonstrators, offers to examine some returns in some electoral districts -- a farcical fix that will do nothing to alter the fraudulence of the election.

Moreover, this incipient revolution is no longer about the election. Obama totally misses the point. The election allowed the political space and provided the spark for the eruption of anti-regime fervor that has been simmering for years and awaiting its moment. But people aren't dying in the street because they want a recount of hanging chads in suburban Isfahan. They want to bring down the tyrannical, misogynist, corrupt theocracy that has imposed itself with the very baton-wielding goons that today attack the demonstrators.

This started out about election fraud. But like all revolutions, it has far outgrown its origins. What's at stake now is the very legitimacy of this regime -- and the future of the entire Middle East...

And where is our president? Afraid of "meddling." Afraid to take sides between the head-breaking, women-shackling exporters of terror -- and the people in the street yearning to breathe free. This from a president who fancies himself the restorer of America's moral standing in the world.
Posted by DH at 9:13 AM