Monday Morning at an Abortion Clinic: What's Normal Is Exactly What's So Tragic 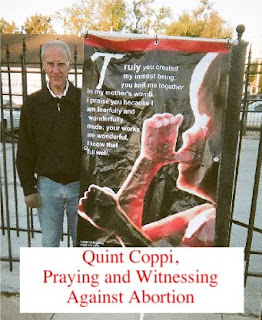 I mentioned last Monday our sidewalk counseling at the Bellevue abortion clinic where the notorious Leroy Carhart kills preborn children. As regular visitors to this blog know, a few of us engage in this peaceful, prayerful ministry every week there. And our demeanor, our purposes, and our methods are the same that they've been for nearly three decades: beginning at abortion clinics on 49th and L (now closed down), at 46th and Douglas (now closed down), on S. 16th Street in Council Bluffs (now closed down), and at various other abortion facilities around the country.

Those guidelines for our sidewalk counseling ministry can be read right here at the Vital Signs Ministries website.

During our time we have seen several abortionists quit the grisly business: Epp, Weidman, Orr, and Severson. We continue to pray for them -- none of them has yet repented from the innocent blood they've shed -- even as we continue to pray for the thugs who continue to commit abortions in our state, Carhart in Bellevue and C. J. Labenz who kills children for the enrichment of Planned Parenthood in Lincoln.

The vigilante assassination of George Tiller in Kansas (which we denounced the day of the murder and several times since then in print, in cyberspace and even on TV) has had direct effects here in our area because of Carhart's association with Tiller. Thus the unusual circumstances we encountered Monday morning that I briefly cited in Monday's post. Those circumstances included federal marshals escorting the abortionist to and from the trashy facility there on Mission Avenue plus the intimidating presence of two other cops of some sort near the abortion clinic entrance.

One wonders why the feds and local police haven't responded in a similar way to the murder of Pvt. William A. Long by Muslim terrorist Abdul Hakim Mujahid Muhammad. After all, federal marshals are not escorting military recruiters to their jobs. Nor are they investigating the recruitment and training of Islamic jihadists in American prisons and tax-supported Muslim schools. No, I'm afraid that the police response is just as troublesomely uneven as have been President Obama's and the general media to these two murders. It's a very disturbing picture of how distorted our nation's values have become.

I walked over and talked to the two plainclothes policemen (feds, I think; local detectives probably wouldn't have been driving a rental) but they weren't admitting to anything, particularly that they were The Man. Still, it was a pleasant chat (a bit of cat and mouse, to be sure), but I wanted them to get a fuller, firsthand picture of what pro-life activists are about. Not crazy. Not vengeful. Not full of hate and bitterness. But kindly, intelligent and dedicated to the Christian virtues.

There was another unusual conversation earlier that morning as a young woman came out claiming to be a writer from New York doing a story for Newsweek. Was she? Who knows -- we've encountered a lot of gags over the years. But she played her part well and we did ours too, giving her 15-20 minutes of conversation. She was obviously well steeped in the abortionist's regular justifications, distortions and sheer lies. And whether or not Quint and I broke through, we don't know. We both figured afterward that she probably was a reporter and so I'd ask you to pray that she does a fair news story for her magazine.

But with all the unusual trimmings on the morning, the most important activity was the young women (we believe there were at least eight) who went in to have abortions. Quint and I had a little time to appeal to them from our vantage point. "Girls, the reason we're here this morning is to let you know a few of the facts about abortion -- facts that they withhold from you inside this place. Can we talk to you just a couple of minutes and let you know about the dangers of abortion to your health and future? And let you know of the alternatives we can offer you?"

But the key counseling is provided by Claire and the women that stand with her near the abortion clinic entrance. None of the clients availed themselves (and their babies) of our offers of help on Monday. That was the only "usual" thing of the morning -- and that's what made it, as all such days are, terribly tragic.
Posted by DH at 12:04 PM