Having Gone AWOL From His Most Basic Responsibilities, It's Time for Mark Sanford to Go Home 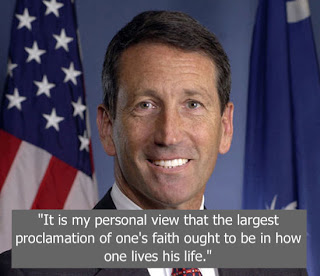 Mark Sanford (Eagle Scout, MBA, successful businessman, Episcopalian, father of four boys, popular politician) has lost an awful lot because of his extramarital adventure but the damage now extends to many, many others -- his family, the family of his Argentinian consort (she also was married), his staff, his party, and the people of South Carolina.

Indeed, society as a whole is injured by yet another high profile example of a farcical, philandering hypocrite, one who turns his back on his wife, his children, his friends, his vows, his responsibilities, and his own best interests to chase the tawdry (and oh-so-temporary) thrills of adultery.

If there's one thing America doesn't need, it's another deadbeat dad on the front cover of the newspaper, especially one who is twisting, excusing and finagling in order to get away with it.

I have no desire to pile on to Governor Sanford's troubles but I do have a desire that he not damage the cause of conservative government any further than he already has. And so I've sent along a brief e-mail to that effect. I hope you do the same.

Your recent actions have most certainly disqualified you for your job. Your immoral actions (not to mention the costly and comically inept attempt to cover them up) have lost you the trust of the citizens of your state. For crying out loud, you've even lost the affection and trust of your own family and staff. Don't drag this ugly thing out any more. Please do the right thing finally -- resign and concentrate on rebuilding your own home life.

More sincerely than you can imagine,

Denny Hartford
Posted by DH at 8:06 AM