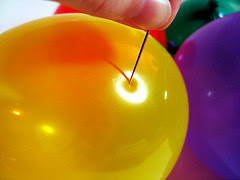 James Rainey is popping some of Thomas Friedman's balloons and suggesting that a lot more popping needs to happen in order to straighten out a dangerous conflict of interest among journalists. Friedman, of course, is one of the New York Times' star columnists but Rainey has dug out that Friedman may be making some $900,000 a year from making speeches.

It turns out that the NY Times does have a policy about outside income -- it just hasn't bothered to actually enforce it.

Now I have nothing against a reporter making money from "outside sources" and it doesn't seem to me that Rainey does either. His only point is that, in the interests of fairness and accountability, journalists and newscasters should openly disclose if (and from whom) they are taking money in those cases where there could be a conflict of interest.

Rainey gives an example. "Shouldn't readers be informed if, for example, a foundation that supports bullet trains paid a hefty speaking fee to a transportation reporter?"

Indeed, I would go even further, suggesting that other relevant connections be publicly revealed. For instance, wouldn't it be better, fairer journalism if the byline of a story included the newsman's affiliations, financial connections, family ties, etc, that might affect the way he "reports" his story? Op/ed articles usually carry such information in the bylines; why not in the general reporting and opinion columns?

It would certainly help the reader evaluate the presentation if such disclosures were made and, who knows, with that disclosure up front, it might well motivate the reporter to be more careful, more focused on facts, and more balanced in the first place.

And, if such disclosure became common, it just might persuade the TV networks from always taking their political reporters from previous Democrat administrations.
Posted by DH at 7:18 AM