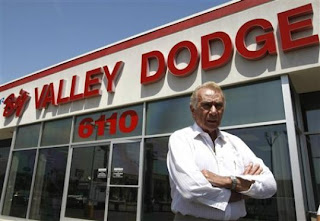 Bloggers on the Right side of the Blogosphere are up in arms over data suggesting that President Obama’s White House auto industry potentates are targeting for closure Chrysler dealers with records of contributing either to Republicans like John McCain or to other Democrats in the 2008 presidential primary.

Red State, American Thinker, Joey Smith and Reliapundit provide anecdotal and quantitative evidence that would appear to confirm a decided bias against dealers who donated to GOP causes or to anti-Obama Democrats...

If this data can be validated, it would appear to be further proof that the Obama administration is willing to step over any line to advance its agenda.

It bodes poorly for America and the rule of law.

Naturally, the MSM have completely ignored the story. But here's a lot more indicating that the blogosphere certainly isn't making the same mistake.
Posted by DH at 6:05 AM