Congress' Action on Credit Cards May Cause More Problems Than It Solved -- A Lot More. 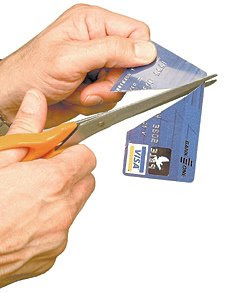 It looks like it may be time for us to to cut up that credit card of ours.

For those Americans who think the new credit card legislation is going to be a big help, they need to think again. For as the credit card companies shift tactics, even consumers who were in no credit card trouble at all will almost certainly encounter other practices that will bite.

These practices may effect even card users like Claire and I who pay off the bill every month to avoid any interest whatsoever. You too? Then be sure and read carefully the bold print in the excerpt below.

It's being touted as a big win for consumers — but the new credit card legislation that President Obama signed into law Friday hardly means that cardholders can start swiping that plastic worry-free.

In fact, as the new rules kick in (most will go into effect nine months after the president signs the bill, while others will kick in as early as 90 days afterward) and banks start curtailing the abusive practices this legislation reins in, other practices will likely emerge that can hurt consumers just as badly. “The pendulum may have swung in the wrong direction”, says Dennis Moroney, research director and senior analyst for TowerGroup, a research and advisory-services firm focused exclusively on the financial-services industry. “The banks now have to respond to these changes.”

The new law prohibits over-limit fees (unless the cardholder agrees to allow transactions that exceed their limits). To make up for that lost revenue, banks will likely introduce other fees. “You will see a re-emergence of fees for all kinds of other services,” says Robert McKinley, founder of CardWeb.com, which provides industry research and analysis. Among the fees cardholders should watch out for: fees for rewards programs and possibly even fees for checking your balance, he says.

Also, expect annual fees to make a comeback, says Moroney. In the 1980s, annual fees were standard, but were dropped as competition among card issuers heated up. Moroney predicts that some issuers will slap annual fees on all their credit cards, while others will tie the fee to spending thresholds, so that only big spenders get a free ride...

The new legislation requires card companies to give consumers at least 21 days to pay their bills. But it doesn't require them to offer a grace period, which isn't the same as the cardholder’s due date — though the two usually coincide, says Chi Chi Wu, staff attorney with the National Consumer Law Center. While the due date designates the day by which a payment must be received for the cardholder to avoid a late-payment fee, the grace period is the time during which the cardholder isn’t charged interest.

McKinley says card issuers may get rid of grace periods altogether, so that cardholders who pay their balances off each month will start paying interest immediately after making a purchase. “The industry has for many years wanted to get rid of the grace period on convenience users,” he says.

What consumers should do: The only way to avoid interest charges if this happens is to stop using credit cards altogether, says Wu...
Posted by DH at 11:32 AM