After Running from the Abortion Clinic, Young Father Runs For The Gold 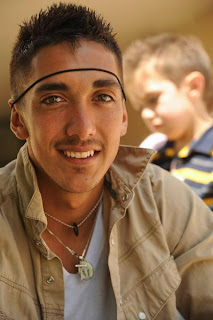 When he made his move in the most important race of his young life, Anthony Luna's mind flashed to his 4-year-old son, whose conception seemingly ended his dreams of glory almost five years ago.

Luna wanted to win that race — the 800 meters at the Division II NCAA Indoor Championships on March 13 in Houston — for himself, for the Metro State program that gave him a second chance, but especially for little Anthony back home in Westminster.

Slender and fluid, Luna surged for the last 200 meters and became an NCAA champion whose story of redemption and determination inspires everyone it touches.

He'd been a state champion at Ranum High School in 2004 and won a scholarship to Division II power Adams State, but got his girlfriend pregnant that summer. He took responsibility, turned down the scholarship to take care of his son and got a job as an apprentice electrician, his life on the track seemingly over.

But thanks to the second chance Metro State coach Pete Julian gave him, Luna became the school's first NCAA track champion, and this week he goes after his second title at the NCAA Outdoor Championships in San Angelo, Texas, with the finals Saturday. [For the results, see the close of this post.]...

Luna and Stabile went to an abortion clinic after they found out she was pregnant but changed their minds when they got there.

"We realized this wasn't the right thing to do," Luna said. "At that moment it was like, 'We're going to (have the baby), it's time to tell our parents.' "

Luna and Stabile sat down with all four parents and broke the news. Their parents were supportive.

"We said, 'We will help you, we will back you up, as long as you do your part,' " said Luna's father, also named Anthony, who works nights in a landfill for Waste Management. "I think he got the message and he said, 'OK, I'm going to show you I can do it.' And he's done it."...

Read the rest of this story here in the Denver Post.

Oh yeah; how did he do last Saturday? Again from the Post:

Luna finished in 1 minute, 49.26 seconds, edging runner-up Andrew Graham of Adams State by 0.50 of a second.

"He fell to the track on his knees and cried," Metro State coach Pete Julian said of Luna, who also won the NCAA indoor title in March at Houston...
Posted by DH at 7:09 AM