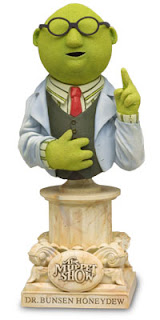 John Holdren, the science adviser of Team Obama, is a true believer...in global warming, that is.

In fact, Holdren is so convinced that humanity is "in a car with bad brakes driving toward a cliff in the fog" that he's willing to try the wildest of schemes, like jetting pollution particles into the upper atmosphere to reflect the sun's rays.

To reflect the sun's rays?

He's gotta' be kidding, right? I mean, how self-aggrandizing and silly can a person be to think he can beat the sun?

What's next? Wearing hats with mirrors on the crown? Firing umbrellas into orbit? Creating forests of fake trees to suck carbon dioxide out of the air and store it?

Careful where you scoff, now. That last one -- the sucking trees option -- Holdren really does think a nifty idea.

It's way past time that these global warming alarmists put away their Superman comic books and their well-thumbed copies of Al Gore's Earth in the Balance and, instead, spend some time with the hard scientific facts.
Posted by DH at 7:57 AM