Dr. Arun Angelo Patil, Professor of Neurosurgery at the University of Nebraska Medical Center, is not only a top-notch scientist and educator; he is also a writer with profound insights on matters of faith, spirituality and social ethics. I have become acquainted with Dr. Patil in the last couple of years through our common interest in promoting adult stem cell research. He's a very impressive guy.

I recently came across Dr. Patil's brief treatise "Human Personhood" (which I print below) and his provocative website. I recommend both.

Human Personhood
Our humanity is determined by the human life we possess; and not our shape, size, color or abilities. Human life is a life-force within every living human being that forms, directs and sustains our state as a live human being. It does this by directing and coordinating our thoughts, words, actions and physiology. It is, therefore, the life of our whole being and the soul of our humanity. To be a human person, therefore, we must have human life; and each of us became a human person when human life entered our being. 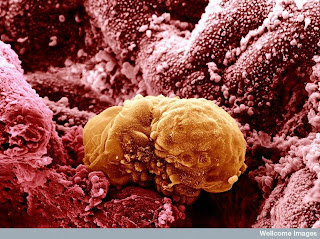 An unfertilized ovum will remain, only an ovum (just like any other cell in our body) until it dies. However, if it is fertilized (which occurs at conception) a new life-force enters the cell; which immediately lays the framework for the entire life of a completely new human being. Furthermore, this life-force initiates, directs and sustains a process that transforms that being from a single cell embryo to a full grown human being with 10 trillion cells; brain with memory capacity equal to 20,000 computers; and abilities to love, forgive, create, perform and think. This life-force, therefore, is not just the life of that cell, but the life of the entire humanity of that being. It is the human life of that being. Since this life entered our being at conception, we became a human person at conception; and human embryos and fetuses are human persons.

Some people may argue that it is acceptable to destroy a human embryo because it does not have brain or intelligence. However, life-force within a human embryo has more intelligence than the most intelligent human brain. This is evident by the fact that, this life-force can transform a single cell embryo into full grown human being with a very complex brain; a fete no human brain has achieved.

In order to understand the role of the life-force in building of a human body let us look at the process of building an extremely complex space station. In order to build the space station and keep it operational, in addition to the blue-print and construction material, an extremely intelligence workforce and director is needed. Similarly, to build a fully grown highly intelligent human being from a one cell embryo and keep him/her operational a highly intelligent life-force, which is human life, is needed. This life-force is different from those found in animals and plants. The difference is that human life-force makes us human; while plant and animal life-forces makes plants and animals, plants and animals respectively.

From the above discussions it is very obvious that human embryos and fetuses are human beings. To kill them, therefore, violates the fourteenth amendment. Furthermore, the declaration of independence of the United States, states that we are all created equal. Since, the time of our creation is at conception; we have equal rights from the moment of our conception. Any law or government that permits or promotes destruction embryo or fetuses, who are the most helpless of all human beings, therefore, shows total lack of moral fabric.

Even if we have an honest doubt about human personhood of embryos and fetuses, in order to protect and respect their rights we must err in favor of them beings human persons just as we always err in favor of an accused person being innocent of a crime until proven otherwise. It is also similar to a situation where we hold our fire during our hunting trip, because others express concern that, what we are about to shoot could be a human being.

Some people justify killing of unborn human beings because they want to protect mother’s right to privacy and choice. However, the right to life, which is the most basic human right, is above all other rights; because without life we can not have any right.

Over two hundred years ago we began a new nation by declaring that all men are created equal; but now from that beginning we have run down to the other declaration, that it is acceptable for mothers to have their babies killed in the womb and make human beings in their embryonic stage a commodity by killing them and harvesting their body parts, in "sacred rights of choice, privacy and cure." Our republican robe is soiled and trailed in the dust. Let us re-purify it. ... Let us re-adopt the Declaration of Independence, and with it, the practices, and policy, which harmonize with it. ... If we do this, we shall not only have saved the Union: but we shall have saved it, as to make, and keep it, forever worthy of the saving. (Adopted from Lincoln's Peoria speech, October 1855).
Posted by DH at 10:39 AM