The New NIH Guidelines on ESCR: Another Step Down the Slippery Slope 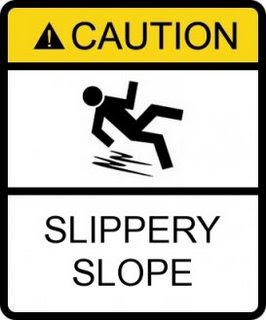 Greg Schleppenbach from the Nebraska Catholic Conference writes to correct a passage in a Vital Signs post from last week. In the post "Have You Signed the Petition Yet?", I wrote of the Nebraska Coalition for Ethical Research petition, "It's a very important statement, one that quite realistically could make the difference between UNMC creating human embryos for destruction (in the vaunted name of science) or convincing the University Regents that Nebraskans so strongly oppose such immoral and counter-productive policies that they will go no further than the limitations set by the Bush administration."

Greg writes, "Neither under the new federal guidelines nor under state law (LB 606) would UNMC be able to create human embryos for destruction. Both federal law (the Dickey-Wicker amendment) and Nebraska law (LB 606) prohibit using public funds to “harvest” the stem cells (the act which destroys the embryos). Furthermore, the University’s policy (since 2001) and the new draft NIH rules disallow funding of research on embryonic stem cells obtained from embryos produced solely for research purposes. The only expansion of ESCR allowed under current University policy and the new NIH rules would be for stem cells harvested from so-called “leftover” embryos produced with IVF for the purpose of treating infertility. The new NIH rules don’t allow funding of research using stem cells obtained from embryos produced solely for research using IVF or cloning."

Yes. Greg is correct and I should have made it clearer that my concerns are not only for what the NIH guidelines say now but what they point to in the future. For I do believe that if the public takes a principled, forceful stand against embryonic stem cell experimentation right now (including signing the very important NCER petition) that it "quite realistically" will impede future efforts of anti-life scientists who do, in fact, desire to create human embryos for destruction.

Johnson said the "seeming restraint" displayed in the NIH draft guidelines "is part of an incremental strategy intended to desensitize the public to the concept of killing human embryos for research purposes. Even today, NIH officials assert that they can go much further when they choose to," he said.

Johnson said on Friday that he suspects the draft guidelines were issued as "part of a 'bait-and-switch' strategy, under which Democratic leaders in Congress will suddenly bring up new legislation that they will claim codifies today's NIH action, but which will in fact authorize further expansions involving the deliberate creation of human embryos for use in research, by human cloning and other methods."
Posted by DH at 9:29 AM