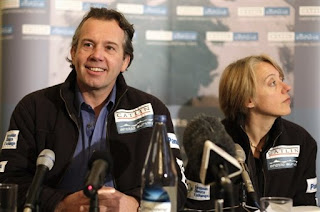 Christopher Booker points out how global warming scientists are "cooking the books" rather than letting the evidence speak for itself. In the case he examines here for the Telegraph, the much-ballyhooed Catlin Arctic Project, Booker demonstrates that the conclusions were fixed long before the data came in -- and that those conclusions are tenaciously held onto even after the data proves otherwise.

What a wonderful parable of our time has been the expedition to the North Pole led by the explorer Pen Hadow. With two companions, he is measuring the thickness of the ice to show how fast it is “declining”. His expedition is one of a series of events designed to “raise awareness of the dangers of climate change” before December’s conference in Copenhagen, where the warmists hope to get a new treaty imposing much more drastic cuts on CO2 emissions.

Hadow’s Catlin Arctic Project has top-level backing from the likes of the BBC, the WWF (it could “make a lasting difference to policy-relevant science”) and Prince Charles (“for the sake of our children and grandchildren, I pray that we will heed the results of the Catlin Arctic Survey and I can only commend this remarkably important project”).

With perfect timing, the setting out from Britain of the “Global Warming Three” last month was hampered by “an unusually heavy snowfall”. When they were airlifted to the start of their trek by a twin-engine Otter (one hopes a whole forest has been planted to offset its “carbon footprint”), they were startled to find how cold it was. The BBC dutifully reported how, in temperatures of minus 40 degrees, they were “battered by wind, bitten by frost and bruised by falls on the ice”.

Thanks to the ice constantly shifting, it was “disheartening”, reported Hadow, to find that “when you’ve slogged for a day”, you can wake up next morning to find you have “drifted back to where you started’’. Last week, down to their last scraps of food, they were only saved in the nick of time by the faithful Otter. They were disconcerted to see one of those polar bears, threatened with extinction by global warming, wandering around, doubtless eyeing them for its dinner.

But at least one of the intrepid trio was able to send a birthday message to his mum, via the BBC, and they were able to talk by telephone to “some of the world’s most influential climate change leaders”, including Development Secretary Douglas Alexander in front of 300 people at “a conference on world poverty”.

The idea is that the expedition should take regular radar fixes on the ice thickness, to be fed into a computer model in California run by Professor Wieslaw Maslowski, whose team, according to the BBC, “is well known for producing results that show much faster ice-loss than other modelling teams”. The professor predicts that summer ice could be completely gone as early as next year. It took the Watts Up With That? science blog to point out that there is little point in measuring ice thickness unless you do it several years running, and that, anyway, Arctic ice is being constantly monitored by US Army buoys. The latest reading given by a typical sensor shows that since last March the ice has thickened by “at least half a metre”.

“In most fields of science,” comments WUWT drily, “that is considered an 'increase’ rather than a 'decline’.”
Posted by DH at 9:34 AM