Yes, WTA. We ARE Looking for a Hero. 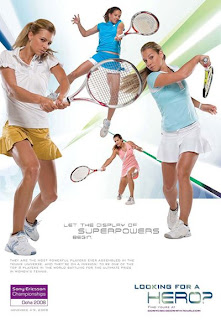 In a follow-up to a story from Monday's Vital Signs blog, Haaretz reports that there are steps being taken -- by a few -- to protest the United Arab Emirates' denial of a visa for an Israeli tennis player. However, the Women's Tennis Association (WTA) has yet to act.

The WTA's new ad campaign (its largest ever) goes under the title of "Looking for a Hero?" Well, wouldn't this be an opportunity to demonstrate in the real world (and not just on the court) what real heroes do?

The Tennis Channel has also canceled plans to televise the women's tournament in light of the Peer incident...

The Conference of Presidents of Major American Jewish Organizations also called on international tennis authorities to cancel a men's tournament in Dubai next week unless the UAE allows another Israeli player, Andy Ram, to participate...The Jewish umbrella group, which is holding meetings in Jerusalem this week, called the decision to bar Peer from participating offensive, discriminatory and unacceptable.

In an interview, the conference's executive vice chairman, Malcolm Hoenlein, said his group had been in touch with WTA tour chief Larry Scott and urged him to cancel the women's tournament next year if Dubai did not change its policy. "There has to be some price," he said. "History teaches us if you let a thing like this go, it grows, and if people perceive it as a license to discriminate, there will be no limit."

He said Scott was very responsive but offered no immediate promises. Scott has said he will consider dropping Dubai from the tour's calendar. The WTA is expected to discuss the matter at an upcoming board meeting...

If you'd like to let the WTA know that the very least they should do would be to break their professional relationship with the UAE until the country stops its anti-Semitic manipulations, you can contact them here. (My e-mail to the WTA simply read, "Yes, WTA. We ARE looking for a hero. And with a decision that the WTA will refuse to countenance such despicable, anti-Semitic actions as the UAE's denial of a visa to Shahar Peer, the WTA can be that hero. So please act now to break off all professional association with countries and organizations which promote such intolerance. Thank you.")

(A related story dealing with tennis and Muslim intolerance is in yesterday's Vital Signs blog.)
Posted by DH at 10:13 AM