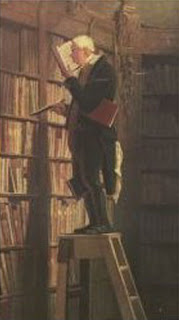 One of the most interesting things about running a blog is that your posts never really go away. Though they leave your front page and even your own memory banks, those posts remain there in cyberspace, ready to zoom up on someone's computer screen. At the touch of a keyboard. Anywhere in the world.

All it takes is a reference link or, more likely, a search engine and, Voilà -- there it is again.

A blog thus serves as both a daily newspaper and a library too. Plus it's a library where the "book" you're looking for can always be there.

This is a wonderful thing when you're running a blog designed for education. Case in point -- one of the most popular posts ever appearing on Vital Signs blog is a quick letter I had sent to someone who was questioning the Mirena Loop "birth-control" device. I explained its abortifacient properties and referred to its reputation for creating many adverse health complications. That's a very important service, indeed, for it provides information that can keep a woman from serious health problems as well as the guilt of using a potential abortifacient. It is a life-saving service in more ways than one.

There isn't a week goes by that there haven't been "hits" on that post from people using search engines to learn about Mirena. And yet that post was created on June 29, 2005!

I frequently have thanked God for this enduring educational force presented in our various cyberspace ministries: the Vital Signs Ministries web site, the Vital Signs blog, The Book Den, and the ones we've just recently launched, Exposition 101 and our Russian-language site, VSM Resources. They are all exciting outreaches, particularly when you remember they are global, immediate and timeless.

And, while I'm on the subject, let me cite just one more example of how our internet resources are still making a difference...even long after their original appearance. This example I just discovered yesterday when searching the web about another Mirena matter. I came across the letter I print below which was sent to a forum on Medication.com just last fall. You'll see the writer credits a Vital Signs Ministries publication for helping open her eyes to the way abortions are occurring through drugs and devices. She then passes along the reference to let others in on the illuminating facts.

This is , of course, fantastic...a very encouraging example of the life-changing value of fact-based, faith-embraced information. And to further emphasize the point made earlier about the timelessness of such educational efforts, the interview the letter writer cites was done in 1994! But yet it is available in 2009, 24/7 right here on the Vital Signs Ministries web site.

Here's the young woman's correspondence, unedited and just as it appeared in the Medication.com forum last October:

I had decided about 3 months ago that i wanted to remove my mirena because of the symptoms. I have done alot of research, my husband demanded that i be well informed before assuming that all my side effects were indeed from mirena. I concluded they were.

And along the way i discovered the way birth "control" really works. Mirena in no way stops ovulation. Therefore your body can continually be getting pregnant while on this product. Doesnt make sense you say? the mirena changes the lining in you uterus so the egg that has already been fertilized, now a living thing with all the dna it needs, your baby, is unable to implant to get nutriens from you uterus, thus starving all the while it can attempt to "implant" between 10-14 days, then it is flush out of your system, lifeless.

wonder why lots of mirena users report "i feel pregnant but the ept says no" its too early to detect, yet your body know. Extreme exhaustion, nausa, dizzyness, even tender breast....i am gonna say something bold....but obvious, THE DRUG COMPANIES ARE IN IT JUST FOR THE MONEY. they wont tell the truth.

the american medical association twisted the definetion of "life" as to be after implantation, however before that it was common knowledge that life begins at conception, that bundle of dna is your baby and is its own, not just a part of you.

There are links to birth "control" methods and cancers and such....doesnt that tell us something, its not good.

Go get a tubal, or use condoms until you can make that decision soundly, i am done with hormons and strange things just chilling inside me.

this link to a discussion is very informative: http://www.vitalsignsministries.org/The%20New%20Abortionists.htm

facts about the pill and other birthcontrol your doctor doesnt tell you: http://www.prolife.com/BIRTHCNT.html
Posted by DH at 9:50 AM