Muslim Author Asma Gull Hasan: ""Many of Us Feel We Have Our First American Muslim President in Barack Hussein Obama." 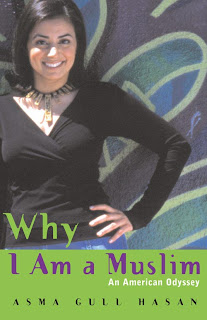 Muslim author Asma Gull Hasan (politically liberal and a big fan of Barack Obama) has quite a revelation for the American public -- our new President is, in fact, a Muslim. Well, kinda'.

Here, in an op/ed published in Forbes, she makes her disturbing case.

I know President Obama is not Muslim, but I am tempted nevertheless to think that he is, as are most Muslims I know. In a very unscientific oral poll, ranging from family members to Muslim acquaintances, many of us feel, just as African-Americans did for the non-black but culturally leaning African-American President Bill Clinton, that we have our first American Muslim president in Barack Hussein Obama.

I know it's odd to say this. At first, I thought I was the only Muslim engaging in this folly, and I am reluctant to express it lest right-wing zealots try to use "Muslim" as a smear and cite my theory as proof of an Islamic traitor in the White House or some such nonsense. But, since Election Day, I have been part of more and more conversations with Muslims in which it was either offhandedly agreed that Obama is Muslim or enthusiastically blurted out. In commenting on our new president, "I have to support my fellow Muslim brother," would slip out of my mouth before I had a chance to think twice.

"Well, I know he's not really Muslim," I would quickly add. But if the person I was talking to was Muslim, they would say, "yes he is." They would cite his open nature and habit of reaching out to critics, reminiscent of the Prophet Muhammad's own approach, and also Obama's middle name, Hussein. Most of the Muslims I know (me included) can't seem to accept that Obama is not Muslim.

Of the few Muslims I polled who said that Obama is not Muslim, even they conceded that he had ties to Islam. These realists said that, although not an avowed and practicing Muslim, Obama's exposure to Islam at a young age (both through his father and his stint in Indonesia) has given him a Muslim sensibility. In my book, that makes you a Muslim--maybe not a card-carrying one, but part of the flock for sure. One realist Muslim ventured that Obama worships at a Unitarian Church because it represents the middle ground between Christianity and Islam, incorporating the religious beliefs of the two faiths Obama feels connected to. Unitarianism could be Obama's way of still being a Muslim. (And let's not forget that the church Obama worshiped at for so many years had a minister who reminds most Muslims of their own raving, excitable ministers. Even if Obama really is Christian, he picked the most Muslim-esque minister out of the bunch to guide him.).

The rationalistic, Western side of me knows that Obama has denied being Muslim, that his father was non-practicing, that he doesn't attend a mosque. Many Muslims simply say back, "my father's not a strict Muslim either, and I haven't been to a mosque in years." Obama even told The New York Times he could recite the adhan, the Islamic call to prayer, which the vast majority of Muslims, I would guess, do not know well enough to recite.

I think many of us Muslims see Obama as Muslim, or at least of Muslim heritage, because his background epitomizes one of the major Muslim experiences--a diverse upbringing that eludes any easy classification as specifically one religion or one culture. So many of us Muslims around the world have Islam in common, but an altogether different culture from one another. Many Muslims share a culture with a Christian, Hindu or Buddhist community but not the same religion. When faced with such diversity, there are no hard and fast rules for Muslim identity...
Posted by DH at 9:40 AM