Guess Who Is Criticizing President Obama for His Unconstitutional Power Grab? 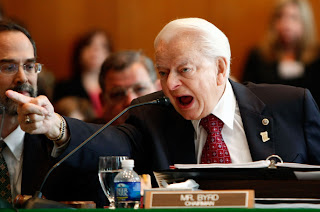 That a Senator is criticizing President Obama's audacity isn't necessarily news. After all, Obama is acting with enormous audacity and there are yet a few principled Senators around to call him on it.

But the surprise here was just who was railing at the new President's crooked policy of appointing White House “czars” to oversee federal policy, saying these executive positions amount to a power grab by the executive branch.

In a letter to Obama on Wednesday, this Senator complained about Obama’s decision to create White House offices on health reform, urban affairs policy, and energy and climate change. The letter said that such positions “can threaten the Constitutional system of checks and balances. At the worst, White House staff have taken direction and control of programmatic areas that are the statutory responsibility of Senate-confirmed officials.”

Oh yes -- the Senator who wrote that letter? Sen. Robert Byrd (D-W.Va.), the cantankerous, devoutly liberal and longest-serving Democrat in the U.S. Senate. Hmm.
Posted by DH at 11:16 AM