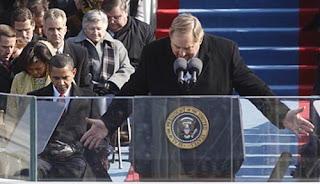 Last week I made some comments on Rick Warren's inauguration prayer. Here's a few other reactions from around the web you may find interesting.

For instance, Brad Hirschfield, a liberal rabbi much in demand by television talk shows, hailed it's gentle inclusiveness. "Tellingly, Pastor Warren, when he finally got around to mentioning Jesus (by his Hebrew, Arabic and Greek/English names), described him as 'the one who changed my life and taught us to pray'. He did not call on Jesus as the one who changes all of our lives, or the one who should do so. He simply shared the facts of his own spiritual journey and the role which Jesus played for him in that journey. Warren expressed pride and joy in what he believes while choosing words that made it clear that no one else was expected to share that journey with him."

Meanwhile, this blogger (whose site carries a colorful sidebar ad saying "This blog supports gay marriage") had no serious problems with Warren's prayer. " I listened to Rick Warren's invocation at the Inauguration on NPR as I was heading back to work from lunch, and you know what ? The man did a decent job. Nothing negative, nothing partisan. All quite uplifting. Couldn't find anything to disagree with. It was, most assuredly, way too Jesus-y for a lot of folks, but what did you expect there ? He's Rick Warren, the pastor of a conservative, evangelical megachurch. And he certainly didn't change my mind on any of the religious or social issues on which we differ. But all in all, not bad."

"Pat Edington, an antiques appraiser from Mobile, Ala., also supports gay marriage – but warmly praised Warren's invocation. 'I thought his prayer was magnificent,' said Edington, a Presbyterian and regular churchgoer. 'I thought he encompassed everything this inauguration was about.'"

The L.A. Times opened up it's story on the matter with this sentence: "In his inaugural invocation Tuesday, evangelical Pastor Rick Warren delivered a message of unity that pleased some of his most vocal critics in the gay and lesbian community."

"Johnny" responded to Christianity Today's reprinting of the text of Warren's prayer this way, "Nice prayer, but you left out who Jesus is so what sort of prayer was it? Saying "to the one who changed my life" is not exactly praising our Lord and Savior and put Him in His rightful place. In fact, it makes Christ appear subjective, as opposed to the objective truth applicable to all people. The implication is "Jesus works for me". This was a safe prayer and I'm disappointed. Yes its a prayer to the nation, but you are a Christian first, everything second. Speak boldly and proclaim the gospel of Jesus Christ."
Posted by DH at 10:42 AM