Congress to Al Gore: Guide Us, Save Us, O Mighty Seer! 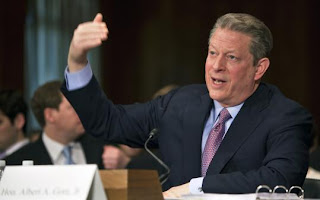 Dana Milbank, in the Washington Post, underscores not only the arrogance and insipidity of Al Gore but the mindless fawning of our current Congress towards his discredited climate change phobias. When you realize these guys are running our country, it's a very disturbing article.

The lawmakers gazed in awe at the figure before them. The Goracle had seen the future, and he had come to tell them about it.

What the Goracle saw in the future was not good: temperature changes that "would bring a screeching halt to human civilization and threaten the fabric of life everywhere on the Earth -- and this is within this century, if we don't change."

The chairman of the Senate Foreign Relations Committee, John Kerry (D-Mass.), appealed to hear more of the Goracle's premonitions. "Share with us, if you would, sort of the immediate vision that you see in this transformative process as we move to this new economy," he beseeched...

Sen. James Risch (R-Idaho) begged the Goracle to look further into the future. "What does your modeling tell you about how long we're going to be around as a species?" he inquired...

The chairman worried that the Goracle may have been offended by "naysayers" who thought it funny that Gore's testimony before the committee came on a morning after a snow-and-ice storm in the capital. "The little snow in Washington does nothing to diminish the reality of the crisis," Kerry said at the start of the hearing.

The climate was well controlled inside the hearing room, although Gore, suffering from a case of personal climate change, perspired heavily during his testimony. The Goracle presented the latest version of his climate-change slide show to the senators: a globe with yellow and red blotches, a house falling into water, and ones with obscure titles such as "Warming Impacts Ugandan Coffee Growing Region." At one point he flashed a biblical passage on the screen, but he quickly removed it. "I'm not proselytizing," he explained. A graphic showing a disappearing rain forest was accompanied by construction noises.

The Goracle's powers seem to come from his ability to scare the bejesus out of people. "We must face up to this urgent and unprecedented threat to the existence of our civilization," he said. And: "This is the most serious challenge the world has ever faced." And: It "could completely end human civilization, and it is rushing at us with such speed and force."...

The Goracle supplied abundant metaphors to accompany his visuals. Oil demand: "This roller coaster is headed for a crash, and we're in the front car." Polar ice: "Like a beating heart, and the permanent ice looks almost like blood spilling out of a body along the eastern coast of Greenland."

The lawmakers joined in. "There are a lot of ways to skin a cat," contributed Isakson, who is unlikely to get the Humane Society endorsement. "And if we have the dire circumstances we're facing, we need to find every way to skin every cat."

Mostly, however, the lawmakers took turns asking the Goracle for advice, as if playing with a Magic 8 Ball...

By the way, Milbank's take on the event and the appearance of this article in the Washington Post represents an interesting and perhaps hopeful sign. Scott Johnson over at Power Line comments:

...What's happening here? Milbank himself is generally a reliable indicator of mainstream liberal opinion. Is anthropogenic global warming not the crisis it's cracked up to be? Is Al Gore rightly deemed a figure of fun? Are those deferential Republican senators lagging indicators of correct opinion? Does Milbank owe those troglodytic Republican House members featured in his 2007 column an apology?

Milbank devoted a respectful 2008 column to James Hansen. Hansen is the chief climate scientist at the NASA Goddard Institute for Space Studies, the man who originally raised the alarm on global warming in a 1988 appearance before Congress and one of Al Gore's closes allies. As far as I can tell from the column, Milbank takes Hansen's claims seriously.

Retired NASA atmospheric scienticst John Theon is Hansen's former supervisor. Watts Up With That? reports that Theon has now publicly declared himself a global warming skeptic who asserts that Hansen "embarrassed NASA" with his alarming climate claims.

Though It would be a mistake to take any of Milbank's columns too seriously, his column today may suggest that "the climate" on anthropogenic global warming is changing, and changing for the better. But will it change in time to prevent the Obama administration from doing serious damage? We can only hope that Milbank will tackle the question some time soon.
Posted by DH at 9:57 AM