The NFL's Matt Lepsis: From a Rocky Mountain High to a Dallas Seminary 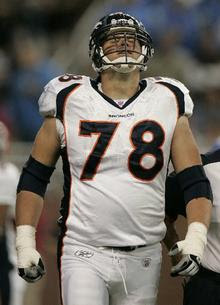 Kurt Oyer, a fellow Broncophile, passed along this compelling story from the Denver Post about Matt Lepsis. Lepsis was an outstanding prep athlete in Texas, an All-Big 12 standout in football for the University of Colorado, and a stellar performer for the Denver Broncos in the National Football League. But that success didn't keep him from getting hooked on a "Rocky Mountain High" of a much different, much more dangerous sort.

...Eventually, Lepsis made the leap to doing drugs on his way to work. Some time during the high times and fast life of Matt Lepsis, though, he started having moments of reflection. It struck him as odd that he would buy a car and a month later, he would want another one. "I'm like, what's going on here?" he said.

Prior to the Broncos' fourth game at Indianapolis, Lepsis sought out kicker Jason Elam, an ardent Christian, during the plane ride. Lepsis had begun his flight toward a life with Christ, although the takeoff was bumpy.

True story: When Lepsis approached Elam a couple of weeks later, he said he was ready to become a Christian. But could he continue his drug habit?

"As funny as it sounds now, I was completely serious," Lepsis said.

Luckily for Lepsis, but not necessarily the Broncos, the drug habit was easier to break than the embrace of the Lord.

"For the first time in my life, I understood who Jesus was and why he died and the sacrifice he made, and I was completely consumed by it," Lepsis said. "It was a pretty radical thing that happened to me right in the middle of season. I could not concentrate on football anymore..."

Lepsis, now studying theology in a seminary at Dallas, is anxious to tell his story of rescue, revelation and redemption. In fact, here's a couple of other news stories where he does just that: the Seattle Times, the Colorado Springs Gazette, and this particularly detailed story in Winston-Salem's JournalNow.
Posted by DH at 10:11 AM