MSM Leaves Iraq War Behind: Not Enough Bad News There 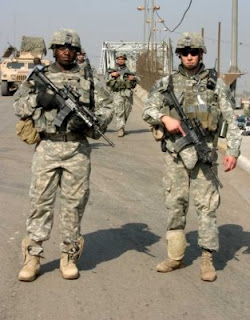 The New York Times' Brian Selter admits (kinda') that the mainstream media is flat out uninterested in Mr. Bush's war. Well, since he started winning it, that is.

“The war has gone on longer than a lot of news organizations’ ability or appetite to cover it,” said Jane Arraf, a former Baghdad bureau chief for CNN who has remained in Iraq as a contract reporter for The Christian Science Monitor.

Joseph Angotti, a former vice president of NBC News, said he could not recall any other time when all three major broadcast networks lacked correspondents in an active war zone that involved United States forces.

Except, of course, in Afghanistan, where about 30,000 Americans are stationed, and where until recently no American television network, broadcast or cable, maintained a full-time bureau.

At the same time that news organizations are trimming in Iraq, the television networks are trying to add newspeople in Afghanistan and Pakistan, with expectations that the Obama administration will focus on the conflict there...
Posted by DH at 8:46 AM