Chrysler's "Thank You" Ads Only Rub Salt in the Wound 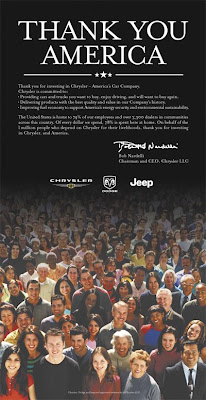 Were you a bit ticked off when you saw those splashy Chrysler ads thanking you for giving the incompetent auto maker your money? Ticked off primarily because you didn't have any choice whatsoever in giving them your money?

Here's part of a Fox News story on the bonehead move.

Chrysler is facing a backlash from taxpayers and conservative groups after the ailing auto company took out a series of full-page newspaper ads last week to thank Americans for "investing" in the company through the government's $17.4 billion auto industry bailout plan.

Critics say the company, which is expected to receive about $4 billion of that bailout money in the near term, should not be spending its already limited resources on pricey advertisements.

"It's quite ridiculous to be spending that kind of money," said Princella Smith, national spokeswoman for American Solutions, an organization headed by former Republican House Speaker Newt Gingrich. "Those ads are just a precise example of the fact that they do not get it ... and it's just in our faces."

Grover Norquist, president of Americans for Tax Reform, said in a written statement to FOXNews.com that Chrysler should give back the money. "Years ago there was a robber who was really polite. He said please and thank you while he was robbing people. At the end of the day, people had their money stolen. Saying thank you doesn't make it OK. They should give the money back," Norquist said...
Posted by DH at 7:32 AM