Castro is Still "One Helluva Guy" to Clueless Ted Turner 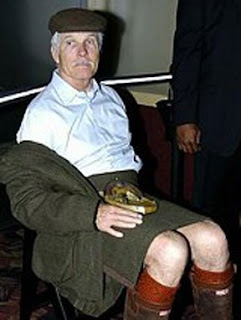 In a stirring article for Front Page Magazine, Humberto Fontova details just a few of the horrific crimes committed by Castro, Guevara and other Communists -- crimes that are inexplicably ignored or even justified by the likes of such thug apologists as Robert Redford, Stephen Soderbergh, the New York Times and Ted Turner.

O'REILLY: Fidel Castro, do you admire the man?

O'REILLY: Now, he has murdered people. He's imprisoned people. There are political prisoners now. He won't let his people use the Internet. Nobody can use that. And you admire the guy?

TURNER: Well, I admire certain things about him. He's trained a lot of doctors, and they've got one of the best educational systems in the developing world. And you know, he's still popular with a lot of people down there...

TURNER: But that has never, to my knowledge, that's never been proven. I mean…

O'REILLY: He's executed political prisoners. I mean, he enslaves people who don't see it the way he sees it. Come on. He runs a dictatorship.

Even the Cuban revolution’s most die-hard apologists have never made so transparently preposterous a claim, and for good reason. According to the Black Book of Communism, 14,000 men and boys had been executed in Cuba by 1964 – the equivalent of more than 3 million executions in the United States. Yet the communist’s defenders continue to march. "VIVA CHE! VIVA FIDEL!" bellowed Jesse Jackson while arm-in-arm with Fidel Castro at the University of Havana in 1984. (Jesse Jackson, by the way, wrote a book condemning capital punishment.)

Indeed, like al-Qaeda generations later, mass murder (often in public), was always key to the Communist quest for and maintenance of power. Communists have always wanted this to be known, as a means to intimidate opposition...

Note that all of Guevara's above quotes are found in his own diaries. Some of these diaries were fashioned into a movie four years ago by Robert Redford (The Motorcycle Diaries). Others provided the screenplay for Che, the four-and-a-half hour “epic hagiography” (as described by the New York Times) directed by Stephen Soderbergh and starring Benicio Del Toro titled, released stateside just last week. Although the above-mentioned directors and producers profess rigid fidelity to Che's diaries, one searches their film in vain for these quotations.

Instead, many of the scenes are altogether fictitious. When Che Guevara entered the Cuban city of Santa Clara during the anti-Batista skirmishes, he promptly ordered the firing squad to murder dozens of “war-criminals” said to be linked to the overthrown government of Fulgencio Batista. This “battle” added up to six casualties on both sides, but Soderbergh and Del Toro – mindlessly sycophantic to their Castroite sources – depict it as a Caribbean Stalingrad that somehow produced scores of war criminals on one side! The New York Times, which “reported” on this “battle” as it “raged,” didn't bother to look into this numerical discrepancy...

The charitable explanation for Turner’s affection for Fidel is that it is fundamentally about business. Back in 1997, when CNN craved a Havana Bureau, Turner's sales pitch was not particularly subtle: "Castro is one helluva guy!" he gushed to a capacity crowd at Harvard Law School during a speech. "You people would like him! Most people in Cuba like him." Within weeks, CNN was granted its coveted Havana Bureau, the first ever granted by Castro to a foreign network. Whitewashing Castro’s record may be good business. But it’s hard to believe that after all this time Turner is really the dupe that his recent remarks suggest.

Ted Turner, of course, has long been an incredibly arrogant person, enjoying the notoriety of his atheism, his disdainful dismissals of Christianity, his opposition to basic American interests abroad, and his mindless defense of America's enemies.

For instance, in addition to the numskull remarks he made to Bill O'Reilly about Fidel Castro, check out this video snippet from a conversation last month with Tom Brokaw. In that program, Turner not only managed to blame the new Cold War on the United States but also came up with this nugget about Vladimir Putin's leadership of the KGB -- "And the KGB, I think, was an honorable place to work. And it, it gave people in the former Soviet Union, a communist country, an opportunity to do something important and worthwhile."