Besides the Verbal Annoyance, Why Shouldn't Caroline Kennedy Be a Senator? 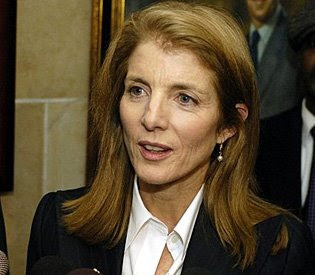 It's not just the endless "you knows" that make Caroline Kennedy a terrible option for a Senate appointment. Check out Howie Carr's giving Caroline the "Profiles in Chutzpah Award" in his Boston Herald column.

...See, JFK’s only surviving child wants Hillary Clinton’s seat in the U.S. Senate, although she has absolutely no qualifications for the position other than her last name, which by the way used to be Schlossberg until last summer.

Now all these dreadful, sweaty Albany and D.C. parvenus who actually had to run for political office are complaining about Ms. Kennedy’s ever-so-Kennedy-esque attempt to cut in line ahead of them. So Caroline grants - or should I say, grahhhhnts - an interview to the Associated Press, and she has the audacity to play the victim card. To get the Senate seat, she says, “I have to work twice as hard as anybody else.”

Huh? You’ve never worked a day in your life, honey. Your pampered-poodle existence makes Uncle Teddy look like a working-class hero. Poor Uncle Teddy is worth a mere $103.6 million, according to the Center for Responsive Politics. Caroline’s gotta be good for at least three times that.

“I am an unconventional choice.”

No, Caroline, you are about as conventional as it gets. You’re operating under the oldest rule in the book, the golden rule. He (or she) who has the gold, rules...

By the way, if you haven't yet taken a look (and a listen) to Kennedy's performance in that now infamous New York Times interview (138 "you knows"), you've got to check out the video (with running counter) over at Perfunction. There's a whole lot more there on Kennedy's yearnings to be a Senator and related items too. Good stuff.

And there's also this tidbit passed along by Ace of Spades:

She also was asked to explain why she failed to vote in a number of elections since registering in New York City in 1988, including in 1994 when Sen. Daniel Patrick Moynihan was up for re-election for the seat she hopes to take over.

"I was really surprised and dismayed by my voting record," she said. "I'm glad it's been brought to my attention."

And the MSM goes after Sarah Palin as inept!
Posted by DH at 7:47 AM