Christians Under Fire in India and Iraq 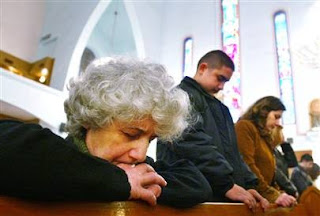 Prayer Digest reports that violent persecutions of Christians are escalating in Orissa, India. Hundreds of churches and thousands of Christian homes have been burned down and some 60,000 or more are living in refugee camps or hiding out in the forest. Forced "conversions" to Hinduism from knife-wielding thugs are common with local police said by many to actually be accomplices in the violence.

Meanwhile, another false (and brutally coercive) religion is behind the persecution of Christians in Iraq. Several thousand Christians (almost half of the Christian population of Mosul in northern Iraq that remains a stronghold of al Qaeda.) have fled the city after attacks upon them by violent Muslims. Christian homes have been firebombed. Christians have been murdered on the streets. And the threats of even more violence are growing.

Pray for those suffering. Pray they will stay faithful. Pray for peace, justice and spiritual power.
Posted by DH at 6:58 AM