ACORN Employee: If Only 40% Were Valid Registrations, That Was "Okay" 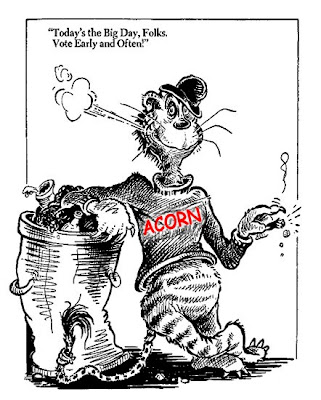 The Philadelphia Inquirer reports on the testimony of former ACORN worker Anita Moncrief and it isn't pretty: fraudulent voter registrations (a gang of 'em), lousy training, daily quotas set for ACORN workers registering new voters (you were fired if you didn't get yours done), "muscle for the money" schemes in which the organization would organize protests against corporations, and more.

Carol Hemingway, president of ACORN's Philadelphia chapter, told reporters not to pay any attention to Moncrief, calling the lawsuit a mere trick "to create voter-fraud hysteria and create a preemptive strategy to de-legitimize results of the upcoming election."

But Hemingway did not refer to the cold fact that all across the country evidence has shown ACORN's voter registration prowess (1.3 million so far) marred by huge numbers of illegalities. Invented names and addresses abound in these registrations as do "repeat voters."

Remember the angst, the anger and the convoluted conspiracy theories arising from Florida's hanging chads? Well, this election is looking like it will involve actions much more organized, much more sinister and much more widely spread than anything we experienced then.

And yet the judges, the media and, so far, the American public are yawning through the crisis.
Posted by DH at 7:58 AM