Want a Clear, Concise Explanation of the Fannie/Freddie Mess? 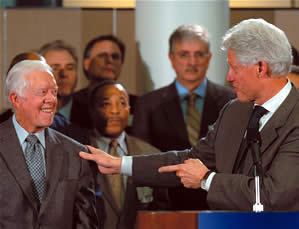 Investor's Business Daily lays the blame for America's financial crisis at the doorsteps of Presidents Carter and, more emphatically, Clinton, as they tried to fund a dangerously ambitious "affirmative action" housing program with huge amounts of government money. It was an unfair, unwise move which eventually submerged our entire financial structure in bad debt.

Though it was Jimmy Carter who signed the Community Reinvestment Act, starting Fannie Mae and Freddie Mac to aggressively lend to minority communities, it was Clinton who "supercharged the process" by rewriting their rules in ways never envisaged by Congress.

...In so doing, he turned the two quasi-private, mortgage-funding firms into a semi-nationalized monopoly that dispensed cash to markets, made loans to large Democratic voting blocs and handed favors, jobs and money to political allies. This potent mix led inevitably to corruption and the Fannie-Freddie collapse...

The rewrite, as City Journal noted back in 2000, "made getting a satisfactory CRA rating harder." Banks were given strict new numerical quotas and measures for the level of "diversity" in their loan portfolios. Getting a good CRA rating was key for a bank that wanted to expand or merge with another.

Loans started being made on the basis of race, and often little else.

"Bank examiners would use federal home-loan data, broken down by neighborhood, income group and race, to rate banks on performance," wrote Howard Husock, a scholar at the Manhattan Institute.

But those rules weren't enough. Clinton got the Department of Housing and Urban Development to double-team the issue. That would later prove disastrous...

Since they could borrow at lower rates than banks due to implicit government guarantees for their debt, the government-sponsored enterprises boomed. With incentives in place, banks poured billions of dollars of loans into poor communities, often "no doc" and "no income" loans that required no money down and no verification of income.

By 2007, Fannie and Freddie owned or guaranteed nearly half of the $12 trillion U.S. mortgage market — a staggering exposure.

Worse still was the cronyism.

Fannie and Freddie became home to out-of-work politicians, mostly Clinton Democrats. An informal survey of their top officials shows a roughly 2-to-1 dominance of Democrats over Republicans.

Then there were the campaign donations. From 1989 to 2008, some 384 politicians got their tip jars filled by Fannie and Freddie. Over that time, the two GSEs spent $200 million on lobbying and political activities. Their charitable foundations dropped millions more on think tanks and radical community groups.

Did it work? Well, if measured by the goal of putting more poor people into homes, the answer would have to be yes. From 1995 to 2005, a Harvard study shows, minorities made up 49% of the 12.5 million new homeowners.

The problem is that many of those loans have now gone bad, and minority homeownership rates are shrinking fast.

Fannie and Freddie, with their massive loan portfolios stuffed with securitized mortgage-backed paper created from subprime loans, are a failed legacy of the Clinton era.
Posted by DH at 8:00 AM