To Avoid Explosions, Turn the Loos to the West. 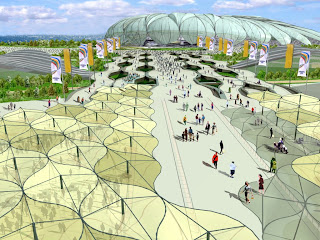 This story from the Daily Mail (U.K.) explains that the toilet facilities to be be built at the Olympic Park in London will not face Mecca as Islam "prohibits Muslims from facing the Kiblah - the direction of prayer - when they visit the lavatory."

Now I don't care which way the Olympic toilets face and I certainly have no serious problem with anyone's respectful courtesy to a religious group. But let's face it. This isn't about religious sensitivity at all; it's about terrorist blackmail.

Other religious groups (especially Christianity) are regularly dissed and no news editor, education official or toilet designer cares a naught. The adherents of the slighted religion simply sigh over the lack of respect and go on about their business.

But a viciously intolerant religion that blows people up when it perceives an offense? That's what turned the toilets.

It is but one of a long string of recent examples of how cravenly spineless Western culture has become.
Posted by DH at 8:28 AM