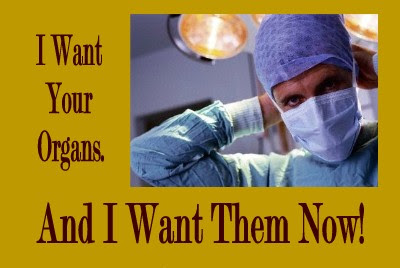 Our old friend and colleague, Dr. Paul Byrne has a review of recent developments in the "brain death" controversy showing how the ever-increasing fever for human organs is causing even what little protection there was for potential donors to be swept away.

..."Brain death" never was, and never will be true death. This has been known by neurologists and organ transplanters since the beginning of the multi-billlion industry. So if a declaration of "brain death" is not true death, but organs are taken legally in accord with "accepted medical standards," why not continue to make "acceptable" less stringent criteria?

In the 10 years after the ad hoc Committee conjured up the Harvard Criteria, 30 more sets were reported by 1978. Every set became less stringent. Less strict sets were reported until eventually there is a criterion that does not fulfill any of the "brain death" criteria. This is known as donation by cardiac death (DCD). Organs are obtained for transplantation by first getting a DNR order, then taking the patient off life support and wait until the patient is without a pulse (NOT WITHOUT A HEART BEAT!).
In the past the waiting time was 10 minutes, then shortened to 5 minutes, then 4, then 2 and now in the NEJM (8-14-08) the waiting time is only 1.25 minutes until they cut out the baby's heart...
Posted by DH at 10:02 AM