Fannie Mae CEO to Congressional Black Caucus: You Are Our "Family" 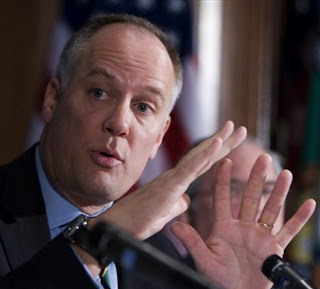 Here's part of P.J. Gladnick's post over at NewsBusters about the "family connections" of Fannie Mae to the Congressional Black Caucus (yes, including Barack Obama). Given what's happened in recent days, the text of Daniel Mudd (he's on a video clip here too) is an astonishing piece of news that in an honest, fair world would be a very big deal.

But we don't live in that kind of world. And so, because this would obviously be an embarrassing item for Democrats, the MSM has ignored it completely.

A stunning example of the incredible disconnect between the mainstream media and the blogosphere is this video of the interim Fannie Mae CEO, Daniel Mudd, addressing the Congressional Black Caucus, including Barack Obama, at their swearing-in ceremony in 2005. Although this video is spreading quickly in the blogosphere, you have yet to see or hear anything about it in the MSM. As you can see in the video, Mudd talks about the problems of Fannie Mae yet that didn't keep Obama and other Democrats from taking large contributions from that organization or doing anything to try to fix it...

As of this writing, a check on Google News shows NO news outlet has so much as mentioned this video despite the fact of Obama being present and later receiving $126,349 from Fannie Mae. Ask yourself this, if the CEO of Fannie Mae had addressed a similar "family" speech to a group of congressional Republicans who had received big donations from that organization, do you not think the video would have already appeared on the nightly news of the major networks?
Posted by DH at 8:53 AM