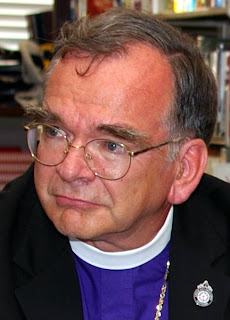 "It is a very sad day for The Episcopal Church. It is a sad day for me, a faithful son of that church." (The Bishop of Pittsburgh, Rt. Rev. Robert Duncan)

David Virtue reports on the trumped-up, illegally conducted deposition of Bishop Duncan by the Episcopal Church House of Bishops, a group that has been marked for some time now not only by heretical views but by a mean and unfair intolerance of those Anglicans who continue to preach traditional doctrine.

But Bishop Duncan isn't taking this action as a defeat. Nor is his congregation.

Indeed, the conclusion of his letter of response stated, "Nevertheless it is also a hopeful day, hopeful because of the unstoppable Reformation that is overtaking the Christian Church in the West. It is also a hopeful day for me personally as I am unanimously welcomed into the House of Bishops of the Anglican Province of the Southern Cone, an act applauded by Anglican archbishops, bishops, clergy and people all around the world.

The Episcopal Diocese of Pittsburgh will move forward under its new Ecclesiastical Authority, its Standing Committee. That body will carry the diocese through to our realignment vote on October 4. With the success of that vote, it will be possible that we be joined together again as bishop and people."
Posted by DH at 9:59 AM