When Will the Press Properly Report on America's Heroes Fighting in Afghanistan? 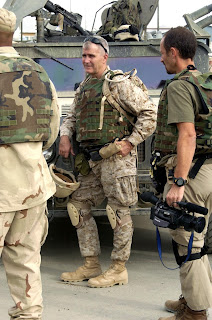 Here in the "Forgotten War," Islamic radicals -- the Taliban and al-Qaida -- are making a major push to destabilize the Karzai government. According to Afghan officials, foreign fighters are flowing across the porous border with Pakistan and enemy attacks are up more than 50 percent from a year ago. This week, 10 French soldiers were killed in a Taliban attack outside the capital. As usual, few in the so-called mainstream media bothered to note any of this.

Though American and coalition casualties have been nearly seven times higher in Afghanistan than in Iraq during the past four months, the campaign against a resurgent Taliban remains widely underreported in the U.S. press. That's why so many of our countrymen are unaware of the courage, commitment and sacrifice demonstrated by the 32,000 U.S. soldiers, sailors, airmen and Marines serving and fighting in the shadows of the Hindu Kush....

Oliver North is on the ground in Afghanistan where he writes his latest column, "Report From a Forgotten War."
Posted by DH at 11:26 AM