Rick Warren: I'm No Fundamentalist and I Was Never Part of the Religious Right 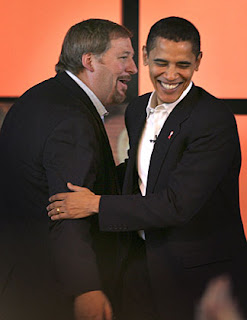 An evangelical, the old saw goes, is just a fundamentalist who has moved to the suburbs.

Perhaps more apropos nowadays is this adage -- an evangelical is a fundamentalist who has found his way easier and his popularity breezier by softening those "fundamentals" into mere opinions, perspectives and negotiables.

Is this true of Rev. Rick Warren?

Well, he certainly comforted some evangelicals (and some conservative Catholics, for that matter) by showing a greater concern for moral issues like abortion and homosexual marriage in last week's Saddleback Forum than he has to date. And in a subsequent interview with Belief.net's Dan Gilgoff, Warren gives answers that are considerably better than others in the New Evangelical movement such as Jim Wallis or Tony Campolo.

However, is it just me that finds Warren's comments still pretty jiggly-wiggly?

Or are there others out there who are bothered (if not downright disdainful) at the Reverend's use of...say, third person pronouns to describe evangelical pro-lifers; his unthinking acceptance of the Democrats' old canard that pro-life advocates are people who don't care about babies after they're born; his self-congratulatory belief that Christians are (only now?) beginning to be interested in humanitarian efforts because Warren has "been seeding that into the evangelical movement and it's getting picked up;" his paranoia about being associated with "fundamentalists" and/or the "Religious Right;" and finally his bizarre boast that "I never take sides." It is a strange brew, indeed.

For the record, then, here's a few of Warren's responses to Mr. Gilgoff's questions that I found disappointing:

...For many evangelicals, of course, if they believe that life begins at conception, that's a deal breaker for a lot of people. If they think that life begins at conception, then that means that there are 40 million Americans who are not here [because they were aborted] that could have voted. They would call that a holocaust, and for them it would like if I'm Jewish and a Holocaust denier is running for office. I don't care how right he is on everything else, it's a deal breaker for me. I'm not going to vote for a Holocaust denier... (Why does Warren keep saying "they" instead of "me"?)

That's why to say that evangelicals are a monolith is a myth, but the other thing is that you've been hearing a lot of the press talk about "Well, evangelicals are changing, they're now interested in poverty and disease and illiteracy, and all the stuff I've been talking about for five years now." And I have been seeding that into the evangelical movement and it's getting picked up, and a lot of people are talking about doing humanitarian efforts.

(I have always deeply resented this grossly inaccurate smear when it came from the left. But at least I knew abortion enthusiasts made the charge simply to change the subject, to get the attention off the blatant barbarism of abortion -- not because it was true. One need only look at the CPCs, the charitable giving, the missions involvement (abroad and here at home), the personal lifestyles of pro-life Christians, and so on, to see just how irresponsible and inaccurate this old lie is. And it doesn't get any truer by being spoken by a preacher.)

I never take sides, and I don't even talk about who or what I might vote for because it's pretty presumptuous of me to tell anybody what I think they should vote for. If I told them, it might influence them. And I think people are smart enough to listen to people on both sides and make a rational decision based on their worldview...

I never was a part of [the Religious Right]. I'm trying to stake out what I call a common ground for the common good, and that for all these people who are disenfranchised by both sides, disaffected. A lot of people would say, "I'm not blue or red. I'm not secular left and I'm not Religious Left. I'm not secular right and I'm not Religious Right. I'm somewhere in the middle. I happen to like some of the things from that platform and some from the other platform, and I like some about that candidate and some about that. But there are some things I don't like about this guy and some about that guy." That's healthy. We're trying to create a new area of people who are not going to get polarized either way. All the polls say that young evangelicals are more committed to pro-life than their parents, but what they're against is the Religious Right. They don't want to be part of the Religious Right, and they're not going to automatically pull the Republican lever….

To Gilgoff's question, "Has the Christian Right tarnished the image of the evangelical movement?", Warren answered:

(Why do none of these guys ever bother to define for the press and public exactly where the term fundamentalist came from; that is, what are those truths revealed in Holy Scripture that are necessary, that are foundational, that are irreducible...that are, dare I say it, fundamental? "Evangelical" is a fine and useful word when it too is defined -- one who believes and bears good news. But if it is used only because we're afraid that that "other word" is too politically-incorrect, then it shows a lack of confidence in our message and perhaps an unhealthy desire to be liked by the secularists who hate the very concept of fundamental truth.)