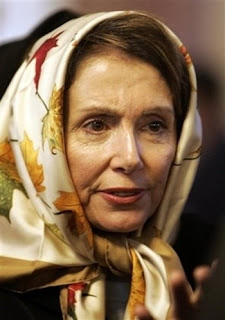 In a sharp rebuke to Speaker of the House Nancy Pelosi (who continues to style herself a Roman Catholic despite openly rejecting several of the Church's priority teachings), Washington Archbishop Donald Wuerl along with Denver Archbishop Charles Chaput and his auxiliary bishop, James Conley, have set the record straight about the Church's position abortion. This Associated Press story refers to the clerics' statements as "the latest sign that the U.S. Catholic hierarchy will not stay silent about politics this election year."

As if it should.

As if the weakened, weasley distortion of Catholicism as preached by Nancy Pelosi, Ted Kennedy and Joe Biden is the only brand that should be allowed in politics.

No, as much as the AP reporter might want Christianity to be a marginalized religion, something to stay inside the stained glass windows and not dare show itself in the public square, authentic Christianity speaks to the real and comprehensive affairs of life and death. These men are simply performing their spiritual duty by clarifying the Church's teaching on the sanctity of life. And, in this case, by correcting the over-the-top perversion stated by a dissenting Catholic on national television.

Pelosi's dramatic misstatements about Catholic teaching (the latest of them anyhow) came in an appearance on Sunday's "Meet the Press" program as she claimed that "doctors of the church" have not been able to define when life begins and that "over the history of the church, this is an issue of controversy."

Her remarks were intended to deflect recent criticism of Barack Obama's extreme positions on abortion, including his votes against legislation that would at least have required infants who survived abortion to receive medical attention.

Such a position is shocking and unacceptable to most Americans. And it is a grave sin according to the Catholic Church. Therefore, it is no surprise that the partisan Pelosi would want to take some heat off her party's nominee.

But not lying, Nancy. Not heresy.

As the AP story relates, Washington Archbishop Wuerl, corrected the Speaker: "Since the first century the Church has affirmed the moral evil of every procured abortion. This teaching has not changed and remains unchangeable." And the statement of Archbishop Chaput and bishop Conley included this: "Speaker of the House Nancy Pelosi is a gifted public servant of strong convictions and many professional skills. Regrettably, knowledge of Catholic history and teaching does not seem to be one of them." Abortion, they said, "is always gravely evil, and so are the evasions employed to justify it."

The story ends with Chaput's opinion that Democratic vice presidential nominee-in-waiting Sen. Joseph Biden (another disloyal Catholic) should refrain from receiving Communion because he too rejects the Church's teaching.

Of course he should.

And again, that's not, at its most basic, a mere political issue -- it's a profoundly spiritual one. For if you want to be a Catholic, there are essential rules to follow. It is disingenuous, dishonorable and self-centered to the max to insist that the centuries of Catholic teaching (not to mention the clear revelations of Holy Writ) be re-shaped to fit your immoral prejudices.

If you don't want to obey those rules, just get out of the club.
Posted by DH at 6:15 AM