Just Why Did Obama Fumble the "Baby Question" So Badly? 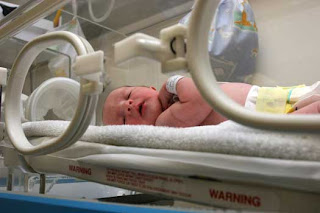 ...Very simple. But Obama wouldn't answer it. His now infamous response: "Well, I think that whether you are looking at it from a theological perspective or a scientific perspective, answering that question with specificity, you know, is above my pay grade."

The most adamant pro-abort will at least agree babies acquire human rights when they have completely delivered.

But Barack Obama couldn't bring himself to say, "At birth." He wouldn't confer human rights to newborns.

So Obama was forced to give an idiotic nonresponse, all the more perplexing since he had to know an abortion question was coming...

Read the whole of Jill's World Net Daily commentary here.
Posted by DH at 11:53 AM