With Friends Like This: Severe Religious Intolerance from America's "Ally" 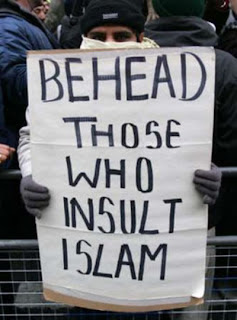 Anne Applebaum, a weekly columnist for the Washington Post, knows a bit about freedom issues around the world. After all, she has served as a correspondent for The Economist in Warsaw; was foreign editor and then deputy editor of the Spectator magazine in London; and she won the Charles Douglas-Home Memorial Trust award for journalism in the ex-Soviet Union. Applebaum is also the author of Between East and West: Across the Borderlands of Europe and the Pulitzer Prize winner for non-fiction in 2004, Gulag: A History.

Therefore, when she perused the latest publication of the Hudson Institutes' Center for Religious Freedom, the 91-page Saudi Arabia's Curriculum of Intolerance, she knew she had found an important and alarming study.

Here is a portion of her subsequent op/ed column:

Because they are so clearly designed for the convenience of large testing companies, I had always assumed that multiple-choice exams, the bane of any fourth-grader's existence, were a quintessentially American phenomenon. But apparently I was wrong. According to a report last week by the Hudson Institute's Center for Religious Freedom, it seems that the Saudi Arabian Ministry of Education finds them useful, too.

Here, for example, is a multiple-choice question from a recent edition of a Saudi fourth-grade textbook, "Monotheism and Jurisprudence," in a section that attempts to teach children to distinguish between "true" and "false" belief in God:

The correct answer, of course, is (c): According to the Wahhabi imams who wrote this textbook, it isn't enough to simply worship God or just to love other believers; it is important to hate unbelievers, too. By the same token, (b) is wrong as well: Even a man who worships God cannot be said to have "true belief" if he also loves unbelievers.

"Unbelievers," in this context, are Christians and Jews. In fact, any child who attends Saudi schools until ninth grade will eventually be taught outright that "Jews and Christians are enemies of believers." They will also be taught that Jews conspire to "gain sole control over the world," that the Christian crusades never ended, and that on Judgment Day "the rocks or the trees" will call out to Muslims to kill Jews.

These passages, it should be noted, are from new, "revised" Saudi textbooks, designed to be less harsh on the infidels. After an analysis of earlier textbooks caused an outcry in 2006, American diplomats approached their Saudi counterparts about modifying the more disturbing passages, and the Saudis agreed to conduct a "comprehensive revision . . . to weed out disparaging remarks toward religious groups."

The promised revision -- hailed at the time as a great diplomatic success -- was supposed to be finished by the beginning of the 2008-09 school year and was accompanied by a Saudi public relations campaign. Among other things, the Saudis sponsored an interfaith dialogue this week, one that all participants hailed as a great breakthrough -- despite the fact that the meetings took place in Spain, apparently because it would be too embarrassing for Saudi Arabia to host Christian and Jewish religious leaders on its own soil. But now the beginning of the 2008-09 school year is nearly upon us, the only textbook revisions have been superficial and the most disturbing part of the books' message -- that faithful Muslims should hate Jews and Christians -- remains...
Posted by DH at 5:24 AM