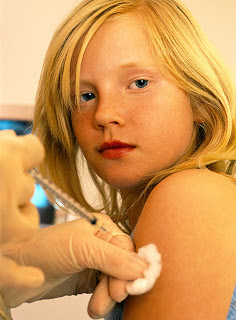 If you recall, it wasn't that long ago that the journalistic powers that be were insisting that Gardasil be required for all 5th and 6th grade girls in the country.

Pro-life, pro-family activists fought the Gardasil campaign as being an unwarranted intrusion into family life, a counter-productive action regarding a young girl's self-esteem and healthy sexual development, and, quite possibly, given the shameful lack of scientific testing of the drug, a serious danger to her physical health.

That didn't stop the MSM chorus FOR coercive doses of Gardasil and, therefore, AGAINST the fuddy-duddys like Jill and others (including Vital Signs Ministries) who fought back against the drug.

Stanek describes the next stage: "After Texas Gov. Rick Perry went so far as to sign an executive order forcing the vaccine, it came to light that Merck had financial ties to the poke pushers. Perry's exec order was overturned, Merck called off its legislative whores, and pro-family proponents won the day, even while liberals and MSM grumbled at our ignorance."

But now Katie has started asking questions, perhaps signaling a general shift in the MSM being more skeptical of Gardasil. But, if you're waiting for the press to apologize or to thank the pro-lifers for being the voice of reason in the fray, don't. Indeed, even this CBS News report didn't go nearly as far as it should have in denouncing Merck and its dangerous drug.

And remember too, the news story wasn't generated by CBS staffers doing up follow-up investigations. MSM giants don't worry about cleaning up the messes they themselves have made. The story was generated by the efforts of Judicial Watch. Good for them. (By the way, you can see their own report on the Judicial Watch web page.)

Just be glad the information is finally breaking out to larger audiences, thus saving many other girls from the ravages of a dangerous drug. And who knows -- maybe a few more parents will stop depending on pharmaceuticals to keep their daughters safe from STDs and instead instruct them in chaste, responsible lifestyles.