Congressman Mike Pence on the "Police State" of Communist China, Forced Abortion, the Olympics and More 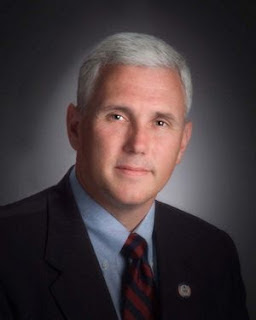 "It is important that we speak truth to power. And with the 2008 Olympics in Beijing about to begin, it is important that the people of the United States be heard on our ideals as athletes from around the world and global media descend on China.

"It is important that we say as the late Tom Lantos, chairman of the Foreign Affairs Committee, said in a hearing last year, a few months before his death: 'China is a police state.'

"I personally believe that the selection of China as the site of the 2008 Olympic Games was a historic error. The Olympics is a symbol of the human spirit and in that regard, a symbol of human freedom, and this police state therefore is precisely the wrong venue for a celebration of human dignity and the human spirit.

"And so I commend my colleagues' support for H. Res. 1370. I am particularly grateful for the call on the government of the People's Republic of China to end the abuses of human rights, to release those imprisoned for political and religious expression, and also challenging China to honor its commitment to freedom of the press of foreign reporters.

"While there is much talk in the media today about the cloud of smog hanging over Beijing as these Games approach, let me say from my heart: the real cloud over the Beijing Olympics is the horror of forced abortion. Therefore I am especially grateful to Congressman Chris Smith for adding an important amendment to this resolution noting that: 'Whereas the Chinese government limits most women to having one child and strictly controls the reproductive lives of Chinese citizens by systematic means that include mandatory monitoring of women's reproductive cycles, mandatory sterilization and contraception, mandatory birth permits, coercive fines for failure to comply,' and the like. This legislation will call on the People's Republic of China to immediately end the practice of forced abortion...

Read more of Indiana's Mike Pence's bold remarks to the Congress here.
Posted by DH at 10:18 AM