When the Term "Troubled Youth" Is No Longer Sufficient 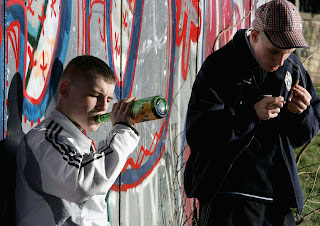 It certainly seems that now is a pretty lousy time to be young in Great Britain.

* A recent study from the World Health Organisation revealed that children in England, Wales and Scotland are among the most likely in the entire world to have illegally consumed alcohol, smoked marijuana and engaged in various forms of premarital sex.

* 1.25 million young people between 16 and 24 are without sufficient education, employment and training.

* According to Government figures just released, the number of abortions in England, Wales and Scotland during 2007 was the highest ever.

* Not surprisingly, U.K. kids are second in the list of "most stressed out" kids in Europe.

Sigh. It's not a pretty picture of what the "benefits culture" has produced, is it?
Posted by DH at 11:10 AM