Now It's the Organization of American States Promoting the Homosexual Agenda 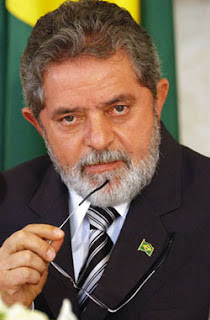 So much for Latin "machismo."

The extremely unnatural demands of the homosexual agenda have found important new backers among South American bureaucrats. Brazil's President, Luis Lula (shown here) has been outspoken about “homophobia" and gay marriage to the extent of seeking criminal penalties against those who defend the natural family and who teach basic facts about what homosexual sex costs a culture (i.e.,disease and the breakdown of moral standards). Well, Lula has managed to swing the General Assembly of the Organization of American States into adopting a formal document broadly condemning "human rights violations" based on so-called sexual orientation and gender identity.

Thus, if one teaches a Sunday School class about Romans 1, writes a letter to the editor complaining of cross dressers parading down a city avenue, or makes a speech explaining how the rampant diseases caused by homosexual sex threaten the economic structure of health care -- you might find yourself in trouble from the OAS.

World Congress of Families Global Coordinator Larry Jacobs asks, “Does anti-gay discrimination include laws limiting marriage to a man and a woman or limiting adoption to families with mothers and fathers? Would it require schools to affirm homosexuality and the other unhealthy perversions? Could it lead to ‘hate crimes laws’ and speech codes that criminalize dissent? Once again, a political institution has been co-opted by the international homosexual movement. Once again, a transnational organization has chosen to enlist with one side in the culture war, to the manifest displeasure of majorities in the nations they represent. Latin cultures, in particular, are noted for their traditional, pro-family orientation.”

By the way, note that 20 activists from homosexual groups met with OAS members before the vote but pro-family organizations were not given an opportunity to present any arguments at all against the resolution.
Posted by DH at 8:48 AM