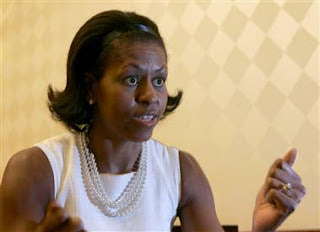 Oh yes; about those Christians who are saying they will vote for Barack Obama in November...do you think they'll be at all bothered by his aggressive support of the homosexual agenda? Or have they pushed the Bible's clear and very serious teachings about homosexuality so far aside that they can applaud Michelle Obama's speech before the Gay & Lesbian Leadership Council of the Democratic National Committee last night? A speech, by the way, for which she was given a standing ovation after promising that her husband would do everything he could to fight discrimination and promote equal rights for lesbians, gays, bisexuals and the transgendered.

* support a complete repeal of the federal Defense of Marriage Act.

* support a complete repeal of the “don’t ask, don’t tell” policy toward homosexuals in the U.S. military.

* oppose any interference by the federal government regarding states who legalize domestic partnerships, civil unions or civil marriage among homosexuals.

“Nothing we have to do over the next four or eight years is going to be easy," Michelle Obama concluded. "There will be powerful forces who believe that things should stay just as they are, that everything is fine, and that’s where you all come in. Your voices of truth and hope and of possibility have got to drown out the skeptics and the cynics.”
Posted by DH at 10:51 AM