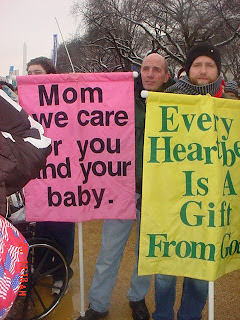 Why the Planned Parenthood center in Council Bluffs (right across the Missouri River from Omaha) and the one 60 miles away in Lincoln have not been performing surgical abortions for two months could quite possibly have something to do with the botched abortion case involving PP and their abortionist, Meryl Severson. However, the relatively low amount asked for in the case and the fact that Severson was earlier dropped from the lawsuit suggest other factors may be involved.

The "normal" news media has been inexplicably lacking in curiosity about the affair but whatever is happening, here are a few established facts to keep in mind:

1) Abortion is a grisly, barbaric business. It is built on lies, selfishness, exploitation and inhumane violence towards the most innocent among us. It is long past time for Severson and Planned Parenthood to stop the killing -- for good.

2) The Planned Parenthood centers remain open for other business; namely, the dispensing of bad condoms, bad advice, and bad drugs. Indeed, the drugs dispensed under the packaging of "birth control" are very powerful drugs that act as abortifacients when breakthrough ovulation occurs...and that happens a lot more than most people realize. Thus, preborn boys and girls continue to die because of Planned Parenthood's despicable actions -- even when the suction machines are turned off.

3) As pro-life sidewalk counselors, we have been pleased that the surgical abortions have stopped at Planned Parenthood for these several weeks. We know that lives have been saved as some of the moms and dads that would otherwise have shown up here have made decisions to carry their babies to term. We have continued to be present at the Council Bluffs site to pray and we will be there to carry on our life-saving witness if and when Planned Parenthood again begins to kill children through surgical abortion. But God, please hear our plea that You shut 'em down forever.
Posted by DH at 7:01 AM