Let's Hear It for the Lt. Dan Band! 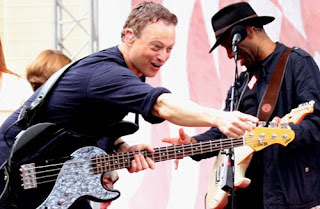 "Purple Haze" at the Pentagon?

Yep...and played by a terrific rock band too. In fact, "Purple Haze" was just one of the songs performed in an hour-long concert given last week by the Lt. Dan Band in observance of Military Appreciation Month. The Lt. Dan Band was started by movie star and CSI:NY headliner, Gary Sinise along with his Chicago buddy, guitarist and composer Kimo Williams. (Both are shown in the photo at right.) The band is named after Sinise's most famous movie character, a police lieutenant in Forrest Gump.

The band is a pretty forceful rock group, specializing in the hard-driving rhythms of the 1970s and 80s. They're very loud, very entertaining, and very good. And I testify to that from having taken Claire to a splendid concert they presented in Kansas City last year.

And they're also a band with a big heart. They frequently perform for U.S. servicemen and women, playing at military bases all over the world. They also give concerts like the one we attended in K.C. in behalf of Operation Iraqi Children, a non-profit organization which sends school supplies (through the U.S. military) to Iraqi kids. Sinise, the bass player who fronts for the band, was a co-founder of the philanthropic organization with Seabiscuit: An American Legend author Laura Hillenbrand.

“It’s very important that you know we are grateful,” Sinise told the Pentagon crowd. “The sacrifice you and your families make — you are not forgotten.”

On this page of Stars and Stripes you can listen to a few of Sinise's remarks to the crowd and even watch a couple of the numbers they performed. But be forewarned, the two examples on this video clip do not reflect the kind of compelling hard rock that is the Lt. Dan Band's forte. For a little bit of that, check out these clips I found over on YouTube: "Up Tight," "Sweet Home Chicago," "Piece of My Heart" and, of course, Kimo Williams' rendition of "Purple Haze."

And here's a complementary program note -- Gary Sinise will be co-hosting with Mickey Rooney and Joe Mantegna the annual National Memorial Day Concert broadcast from the Capitol's West Lawn on PBS this Sunday night. On hand to join them in honoring our nation's best will be Gladys Knight, Sarah Brightman, Charles Durning, the National Symphony Orchestra, and President and Mrs. Bush.
Posted by DH at 2:23 PM