Jack Nicklaus: "It's a Different Day" 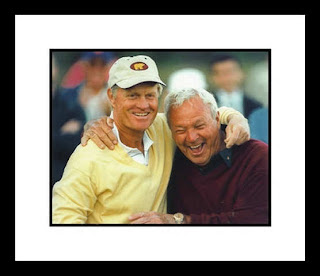 Jack Nicklaus mourns the changes in the gentleman's game...and he's not talking about the money or technology either. No, chalk up one more arena in which the social graces are dying.

...Perhaps the most troubling for Nicklaus is communication skills.

Nicklaus was asked if Tiger Woods ever called him personally when he decided not to play the Memorial because of soreness in his left knee from surgery in April. “It’s a different day and age today, guys,” he said. “It’s all through agents.”

He did appreciate Mark Steinberg at IMG calling him twice over the last few months to report on Woods’ progress, and twice more leading up to the decision Friday.

But that got Nicklaus thinking about the way it used to be. Arnold Palmer was a rival, but he also was a mentor to Nicklaus, and the King once told the Bear that he almost always wrote sponsors a note of thanks for putting on the tournament. “So every tournament I ever played in, I always dropped the sponsor a note,” Nicklaus said.

Then he paused, reflecting on his role as the tournament host at the Memorial. “We get one or two,” Nicklaus said. “I’m not saying that of everybody. We do get one or two. But not very many.” Rarer still are notes of regrets, and there are plenty of opportunities this year. Adam Scott changed his mind about playing, a surprise to tournament officials Friday. Steve Stricker and Anthony Kim were among five players who withdrew Tuesday. Woods isn’t here for the second time in three years. Vijay Singh pulled out with an injury.

“Guys just don’t communicate anymore,” Nicklaus said. “Every once in a while, I might get something. But I don’t think I ever had a note from anybody when they’re going to leave the Memorial Tournament or not going to play or something that wrote and said, ‘Jack, I’m sorry. I had a problem, I can’t be here.”

Someone suggested that most players use text messages. “I think that’s a cop-out,” Nicklaus said.

Does he worry about manners?