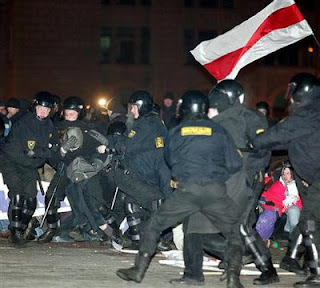 Evangelical pastor Antoni Bokun understands the tragedy involved in Belarus losing its historic reputation as a haven for religious rights. And he sees it not only as a patriotic observer of history but also from the vantage point of being a victim of the Communist dictatorship's increasing persecution of religious believers.

Bokun, the Pastor of John the Baptist Pentecostal Church in Minsk, has been heavily fined for leading worship services that the authorities deem illegal. He was even jailed briefly last year. But Bokun is still standing for Christ and praying that the Communist authorities will come back to their senses and stop the harassment, intimidation and outright persecution that has been launched against Belarusian evangelicals, Catholics and others. Indeed, he is praying for a spiritual revival that will reach into the government, creating a renewal of Belarus' remarkable past as a leader in human rights.

In 1573 --- long before John Locke and Thomas Jefferson, long before the U.S. and British Constitutions, and nearly 400 years before the U.N.'s Universal Declaration of Human Rights --- Belarusians had created one of Europe's first legal declarations upholding religious freedom. Thus, when many other European states were still torturing and executing people for their religious faith, Belarus was protecting religious rights of conscience and serving as a safe haven for dissidents fleeing from their own governments.

Pastor Bokun says, "Inspired by our long history of freedom of conscience, Belarusians continue to work and hope for the day that our country will reclaim its heritage as a land of religious freedom." Having a special love for Belarus myself and being a visitor to that nation ten times now, I certainly share Pastor Bokun's dream and applaud the brave, sacrificial efforts he and others are making to stand for the gospel, for religious freedom, and for a retrieval of Belarus' noble history.

Read more about the situation from Pastor Bokun's article, printed by Forum 18, right here.
Posted by DH at 7:36 AM