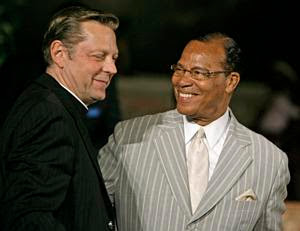 In a Vital Signs post last week ("Obama's Theater of the Absurd"), I linked readers to a NRO column by Sabrina Leigh Schaeffer which presented some alarming material about Barack Obama's many anti-Israel friends and advisors. Schaeffer mentioned one of the worst was a fellow Obama has described as one of his three spiritual mentors, the Rev. Michael Pfleger, a renegade Catholic priest at South Side Chicago's St. Sabina Church. (He is shown here with Louis Farrakhan when the Nation of Islam leader spoke at Fr. Pfleger's church.)

Well, Fr. Pfleger moved from a brief mention in NRO to his very own headline story there (and at many other news organizations) yesterday as a video clip surfaced showing Pfleger, from the pulpit of Obama's own church, mocking Hillary Clinton as a whining white supremacist.

You really need to watch the spectacle for yourself and this YouTube video clip gives you that opportunity. You'll see that the scene involves not only the guest minister's weird parody but, sadder still, the overwhelming approbation he receives from the church congregation.

It's a very ugly scene. Indeed, far from promoting racial reconciliation, Barack Obama's "spiritual mentors" are doing the very opposite. And, if the audience at Trinity United Church of Christ is any indication, they're actually widening the racial divide rather effectively.

Here's how MSNBC summarized the moment --

Saying he was seeking to “expose white entitlement and supremacy wherever it raises its head,” Pfleger mocked Sen. Hillary Rodham Clinton of New York for appearing to weep at a campaign appearance before the New Hampshire primary in January, saying she was crying because “there’s a black man stealing my show.”

“She always thought, ‘This is mine. I’m Bill’s wife, I’m white and this is mine,’” Pfleger said in his fiery sermon.

As the racially mixed congregation responded “Amen!” and “Yes, sir!” Pfleger pretended to cry and shouted: “And then out of nowhere came him, Barack Obama. And she said: ‘Damn! Where did you come from?! I’m white! I’m entitled! There’s a black man stealing my show!’

“She wasn’t the only one crying!” he said. “There was a whole a lot of white people crying!”

Then, sensing that he may have gone too far, Pfleger added: “I’m sorry. I don’t want to get you in any more trouble. The live streaming [video] just went out again.”

As news of his antics spread, Fr. Pfleger was forced to finally give an apology. He tried to distance his remarks from "Sen. Barack Obama’s life and message" and then gave out with this beauty, "I am deeply sorry if they offended Sen. Clinton or anyone else who saw them.”

"If" his smug, self-righteous, over-the-top slander "offended" Mrs. Clinton "or anyone else who saw them"? Does he really mean to suggest that anyone, under any circumstances at all, could fail to see the deep and savage offense he most certainly intended for his remarks to have?

Sorry, Rev. Such an empty apology is not to be accepted. Not by Hillary. And not by Americans of any color or background who genuinely want to move beyond the politics of race.

As Jim Geraghty notes in the NRO piece, "The argument that 401(k) accounts are inherent representations of white supremacy will be news to many, many Americans."

And yes, an apology eventually came from Barack Obama too. “As I have traveled this country, I’ve been impressed not by what divides us, but by all that unites us. That is why I am deeply disappointed in Father Pfleger’s divisive, backward-looking rhetoric, which doesn’t reflect the country I see or the desire of people across America to come together in common cause.”

True, Obama's apology leaves something to be desired as well. For it seems to indicate that he's only recently learned that Americans have more to unite them than divide them. It smacks a bit too much of his wife's pride in the country only beginning with Obama's presidential run and of the candidate himself only now beginning to wear an American flag pin.