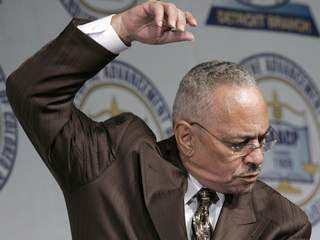 One of the strangest things about the NAACP Wright pseudo-scientific speech on learning, and its enthusiastic CNN coverage and analysis, was the abject racialism of Wright. It was sort of an inverse Bell-Curve presentation, based on assumed DNA differences.

His convoluted explanation of African-American right-brain 'oral' culture as more creative, musical, and spontaneous versus European left-brain traditional analysis could never have been given by someone white to that audience without justifiably earning booing and catcalls...

In short, Wright's speech on black-right brainers, white-left brainers — replete with bogus stereotypes and crude voice imitations — was about as racist as they come and at one time antithetical to what the NAACP was once all about. Again, the Obama campaign and its appendages have set back racial relations a generation. Just ten years ago, any candidate, black or white, would have rejected Wright making a speech about genetic differences in respective black and white brains. Now it's given to civil rights organizations by the possible next President's pastor and spiritual advisor — and done to wild applause for an organization founded on the idea that we are innately the same, while being gushed over by ignorant "commentators."

As I said before, between Wright's racism and hatred, and Obama's contextualization of what he has said, we have so lowered the bar that the next racist (and he won't necessarily be black) who evokes hatred of other races and then offers a mish-mash pop theory of genetic differences will have plenty of "context" to ward off public fury.

(Victor Davis Hanson, commenting in NRO's Corner on Rev. Jeremiah Wright's strange remarks at the Detroit NAACP the other night. The text of that entire speech can be read at this CNN page.)

And for a few other takes on Wright's performance and what it portends for American race relations and Barack Obama's candidacy, check out these Town Hall responses from, respectively, David Limbaugh, Bill Murchison, George Will, and an especially good column from Rich Lowry.
Posted by DH at 9:19 AM