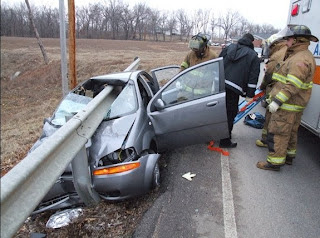 Let me take a moment here to commend the Nebraska Unicameral for unanimously passing LB 736 earlier this month, a bill that will require the installation of an alcohol ignition interlock device for both a first and second drunk driving conviction. Such a move is long overdue.

With someone injured (on average) every three hours in Nebraska due to alcohol-related vehicle accidents while there is (on average) someone killed in alcohol-related crashes every four days, the responsibilities of lawmakers to defend their citizens' lives, health and property from drunk drivers couldn't be clearer or more critical.

It is not coincidental that the effort to pass LB 736 was led by pro-life Senators Tony Fulton of Lincoln and Senator Tom Carlson of Holdrege. Excellent job, guys.

Still, there's a very long way to go. Even with similar legislation passed earlier this year in West Virginia and Washington, the new Nebraska law means that only six states in the entire nation require ignition interlocks for all convicted DUI offenders.

The interlock devices mandated by the new law involve a breath analyzer linked to a vehicle's ignition system. When a drunk driver wishes to start the equipped vehicle, the driver must first blow into the device, and the vehicle will not start unless the driver's alcohol level is below the predetermined limit. Studies have shown the devices are up to 90% effective in keeping both first-time and repeat offenders from recommitting the crime.

This approach is of tremendous importance due to the number of criminals whose licenses are revoked because of DUI offenses but still keep driving anyway. Indeed, some analysts argue that up to two-thirds of those whose licenses are suspended for drunk driving continue driving.

"By passing this legislation, Nebraska has taken a major step to implement a proven solution to prevent deaths and injuries due to drunk driving," said Glynn Birch, national president of MADD. "We know the technology works - it can save thousands of lives, but also gives offenders the ability to drive without endangering the public, which allows them to reintegrate into their lives more rapidly and effectively."
Posted by DH at 10:12 AM