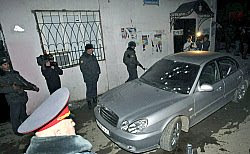 Gadzhi Abashilov, the head of Dagestani state television, and Ilyas Shurpayeva, a Dagestan-born reporter for Channel One television were both mysteriously murdered last Friday. Abashilov was brutally attacked by machine gun fire while in his car. He was killed instantly and his driver was hospitalized in critical condition.

Shurpayev was found stabbed and strangled with a belt in his Moscow apartment.

"Honestly, the entire city was just stunned," my driver said. "Ilyas was our pride – consider him the face of Dagestan. People say he stumbled on something important and told Abashilov. Then they were both killed."

How often those two words are used in relation to the murders of Russian journalists.
Posted by DH at 9:16 AM