"In Hope of Eternal Life" 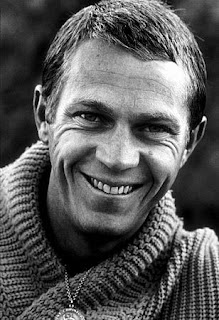 Amid the daily battles of the culture wars, the Christian must ever be mindful of "the hope that is in us" -- the confident hope that gives us the inspiration, strength and wisdom to fight effectively for the cause of Christ. And that hope, of course, moves us to retain a passion for evangelism, spreading the good news of a coming Kingdom even as we seek to fulfill our biblical responsibilities in this one.

In this regard, then, be encouraged by the testimony of the "coolest cat" in Hollywood's 1960s, Steve McQueen.

...When Steve discovered he had lung cancer, he began to take stock of his life, and to look for the answers and for the hope he had not found during his lifetime. He wanted to know what came next and was yearning for hope in the "beyond." Both his third wife Barbara Minty and his flying instructor Sammy Mason encouraged him in his spiritual search.

McQueen eventually made it to a Billy Graham crusade. By the end of the meeting, Steve McQueen had given his heart to Jesus Christ. He still had many questions, though, and he sent word through one of the evangelists he wanted to meet with Billy Graham. They were able to meet in a limousine on the way to the airport.

McQueen told Graham be believed Jesus was the Son of God and he had put his trust there, but he had many questions about the scriptures. Most importantly, McQueen wanted to know how could he be sure heaven awaited him. Graham turned his Bible to Titus 1 verse 2: "In hope of eternal life, which God, Who cannot lie, promised before the world began..."

The was the verse he had longed to hear. McQueen was excited and asked, "What was that verse again?" and told Graham he needed a pencil and some paper so he could write down the verse. Billy Graham instead gave Steve McQueen his Bible.

Some time after this Steve went to Mexico for some experimental cancer treatments. He died there... but that was not the end of Steve McQueen. They found his Bible in his hands, turned to Titus chapter 1 and verse 2, with his finger laid on top of that verse, his future sealed by God, Who cannot lie."
Posted by DH at 10:01 AM