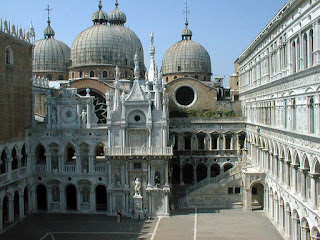 For this weekend, here's a few recommendations:

* A story from the Daily Herald (suburban Chicago) about Alina Fernandez Revuelta, Fidel Castro's daughter who nevertheless is an outspoken, eloquent critic of Castro's Communism. ("Cubans are more pro-American than Americans," she said jokingly.)

* A nifty article from Thomas F. Madden at NRO on the unfounded, anti-religious, and sublimely ridiculous propaganda of the Discovery Channel's "The Lost Tomb of Jesus" aired just a year ago.

* President Ronald Reagan's Address to the Members of the British Parliament, June 8, 1982 (..."We're approaching the end of a bloody century plagued by a terrible political invention -- totalitarianism. Optimism comes less easily today, not because democracy is less vigorous, but because democracy's enemies have refined their instruments of repression. Yet optimism is in order, because day-by-day democracy is proving itself to be a not-at-all-fragile flower. From Stettin on the Baltic to Varna on the Black Sea, the regimes planted by totalitarianism have had more than 30 years to establish their legitimacy. But none -- not one regime -- has yet been able to risk free elections. Regimes planted by bayonets do not take root...")

* "Death on a Friday Afternoon," an Easter-oriented Breakpoint transcript from Chuck Colson.

* "The First Cry from the Cross," a sermon preached in 1869 by Charles Spurgeon.

* And finally, a couple of items related to the candidacy of Barack Obama:

1) "The Pied Piper of Platitudes," a commentary by Mike Rosen in the Rocky Mountain News (It's too bad that Barack Obama, if he's elected in November, won't be the nation's first black president. Bill Clinton has already secured that distinction, so dubbed by Toni Morrison, the black, Nobel Prize-winning author.

But Obama could still be the nation's first woman president, at least in the estimation of Bonnie Erbe, nationally syndicated columnist and host of a PBS weekly panel show. Although Erbe reliably comes at politics and issues from the perspective of a liberal and feminist, she appears to have forsaken Hillary, seduced by Obama's siren song. In a recent column, Erbe declared that, "Obama - metrosexual, pro-choice, pro-health care, and anti-poverty - is, in every political sense at least, more of a woman than Clinton." Hillary, that is, not Bill.)

2) "Grandma Got Run Over By A Campaign Speech," by Mona Charen;