David Paterson Is Through Talking 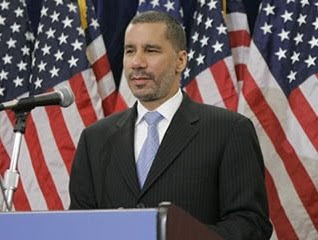 New York's new Democrat Governor David Paterson said yesterday he's no longer talking about his personal life. After all, he's already told us about his numerous adulterous affairs, his wife's affairs, and his marijuana and cocaine use. So what else is to know?

Well, for one thing, an explanation of his out-of-state trips with a former aide, Lila Kirton, to promote Hillary Clinton's presidential candidacy remains in order. Also, Paterson should give full disclosure about purchases made with campaign funds at Bloomingdale's and Tiffany & Company while a state senator.

But Paterson thinks he's revealed enough. So, despite the fact that there are still relevant questions on the table AND the fact that his previous errors in judgment and morality have created more than enough reasons to suspect his credibility, Paterson has the gall to start playing the victim game with journalists.

Let's hope they don't play patsy for Paterson and let him get away with his new (but too late already) zipped lip strategy.
Posted by DH at 9:05 AM